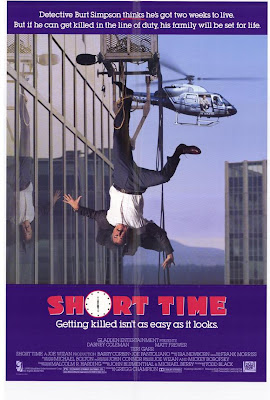 Released twenty years ago today, on May 4, 1990, was Short Time, a silly comedy written by John Blumenthal and Michael Berry and starring Dabney Coleman, Matt Frewer, and Teri Garr. The premise: Burt Simpson (Coleman), a soon to retire police detective, learns two critical facts: He has but two weeks to live, and his family will not be entitled to his retirement benefits if he dies of natural causes. The problem: The diagnosis is in error, and he is in fact perfectly healthy. However, he spends the bulk of the film taking wild risks in an effort to be killed in the line of duty, thereby ensuring his family's security. Those attempts are played for comedy. I'm not certain that I ever saw this film, and if I did, it was sometime in the early 1990s on basic cable.

This concept cries out for a remake. Imagine a dark, gritty revisiting of this film done for drama rather than slapstick comedy. Denzel Washington stars as Burt Simpson, a grizzled cop whose imminent retirement plan is disrupted when his doctor (Philip Seymour Hoffman) informs him that he has but two weeks to live. Simpson uses the opportunity to recklessly pursue the villainous drug lord (Russell Crowe) against whom he could never quite build a case. But that is surely not to be. These days, Hollywood only remakes old big budget action and horror flicks.

The film apparently never made it to DVD, which is unfortunate, as we enjoy the work of Dabney Coleman. After all, he starred in 1983's Cloak and Dagger, which we here at Chronological Snobbery remember fondly. And who could forget his 1980s sitcom, "The Slap Maxwell Story?"
Posted by Ransom at Tuesday, May 04, 2010
Labels: 1990, Films of the 1990s