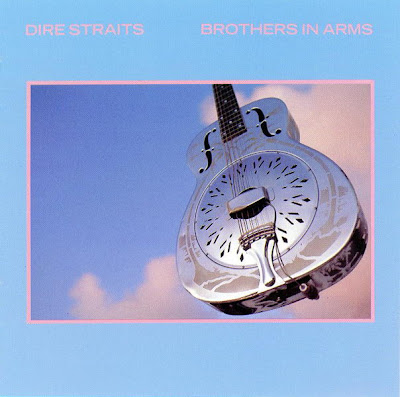 Twenty five years ago today, on May 13, 1985, the rock group Dire Straits released its album, Brothers in Arms, which featured the well remembered title track, the 1980s staple "Money for Nothing," "So Far Away," and "Walk of Life." Years later, in May of 2001, the song "Brothers in Arms" was prominently featured in the season two finale of "The West Wing," depicted below:


Really, Brothers in Arms is one of those quintessentially 1980s albums like Thriller or Born in the U.S.A. which is so associated with that time period that memories of that decade come back in a Proustian rush whenever the songs from it are heard. How can you not be taken back to that era when you hear the opening riff of "Money for Nothing" or the first few bars of "Walk of Life"?
Posted by Ransom at Thursday, May 13, 2010
Labels: 1985

I don't really understand how a band puts out an album like "Brothers in Arms" and (a) never achieves the same success again, and (b) is able to still get a nod in 2010 without being scorned as a one-hit wonder. Sort of a stunt.

I continue to really like this album, perhaps for nostalgia's sake as it doesn't seem like something I'd notice much today. I salute thee, ChronSnob, for the rush of memories brought on by mentioning the record. (mowing the lawn was a lot easier with this tape in the walkman)