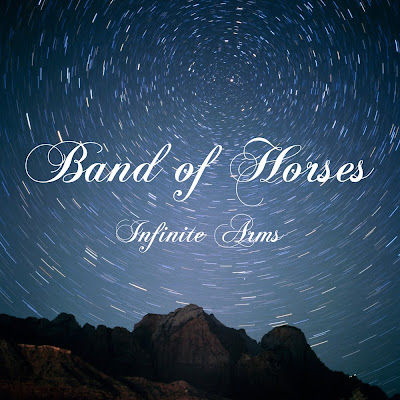 Don't forget: Infinite Arms, the new album by Band of Horses, hits stores today. If you're not familiar with the group's work, you should probably investigate. You may be familiar with "No One's Gonna Love You," one of their most recognizable songs from their 2007 album, Cease to Begin. That tune, in fact, was featured in both Zombieland and an episode of NBC's "Chuck." I've seen them play in concert, and though it was not the nearly religious experience that had been described to be by other fans who had seen them live, it was a fun and occasionally moving show.
Posted by Ransom at Tuesday, May 18, 2010

Thanks for the reminder. "The Funeral" is still one of my favorites, and I've been meaning to check out their newer stuff.

On behalf of Columbia Records and Band of Horses, many thanks for plugging "Infinite Arms" on your site (street date 17th May UK & Europe / 18th May North America) ... .. thanks, also, on behalf of the artist and labels for not posting any pirate links to unreleased (studio) material and, if you / your readers want good quality, non-pirated, preview tracks, then a full length version of "Factory" is available for fans and bloggers to link to / post / host etc on the band’s site at www.bandofhorses.com ... .. for further details of the new album, pre-orders, on-line promotions, videos and 2010 shows, check-out the official site, as well as the band’s MySpace at www.myspace.com/bandofhorses ... .. and keep an eye on these official sources for details of further news, preview material and on-line promotions.

Also and as a goodwill gesture to fans and bloggers, an exclusive widget for the video of “Compliments” is available on the band’s site and an exclusive preview stream of the full album is also now available via stream.bandofhorses.com/ ... .. these are for embedding / hyper-linking ONLY and for streaming by fans directly off the band’s website, so please reciprocate this goodwill gesture by NOT ripping or re-posting these files.

Thanks again for your plug.

I am apparently being monitored by some type of record company security outfit. Yikes.

Kinda ashame their most recent album pretty much sucked.

Here are 11 frequent injection molding defects to watch out for when inspecting injection-molded products, what the causes are and how one can keep away from them. Junying Stylus Pens certainly one of the|is amongst the|is probably certainly one of the} best mold makers in China, providing plastic elements manufacturing and prototyping options for nearly every industry. Based on your needs, we are able to} provide 3D printing, CNC machining, and injection molding providers for prototypes, and low to high-volume manufacturing runs. Before any manufacturing can begin, the half to be produced must undergo the design part. Businesses might have in-house engineers designing these components, or they might work in live performance with engineers from a group such as Reliant Plastics to supply a wise part design.