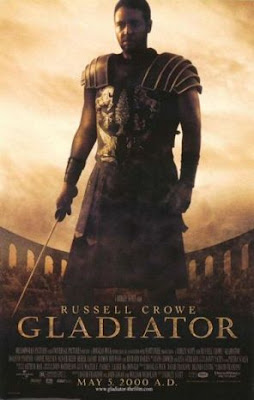 Ten years ago today, on May 5, 2000, the big budget blockbuster Gladiator hit theatres. Directed by Ridley Scott, and starring Russell Crowe, the film was a huge success. It made Crowe an action hero, gave a star turn to Joaquin Phoenix, and became the last film of Oliver Reed. (It also featured the lovely Connie Nielsen.). But what to say about it ten years later?

It certainly had its moments. But the film, occasionally fun, but mostly mediocre, could have showcased a bit more Roman architecture via CGI, and its supernatural elements could have been omitted to make the Maximus narrative more compelling. Certainly, it was undeserving of the Best Picture accolade, but it received it anyway, likely due to its financial success more than anything else. But here's the real question about its legacy: How many DVD players were sold in 2000 as a result of this film? Remember, back then, the DVD player was a new technology, and consumers always need that extra push over the cliff when adapting to new audiovisual components. But could they justify the acquisition of a new system when it would enhance the experience of watching a big budget flick like Gladiator? Very likely. I suspect that for many mainstream consumers, this film was that last push (just as the newly released Avatar may be for Blu-Ray players today). So for that, we must say thank you, Gladiator. You helped us to adopt a new video technology that would become obsolete just a decade later. Thanks.
Posted by Ransom at Wednesday, May 05, 2010
Labels: 2000, Films of the 2000s

I have a distinct recollection of watching Gladiator win best picture and deciding, I'll never pay any attention to the academy awards ever again because they have just demonstrated they mean nothing (or at least that "best picture" certainly doesn't mean best picture).

Reading this post, I'm astonished that it wasn't until 2000 that I had this realization - I guess I'm a slow learner

Alas, my dear old friend Horus, you are a slower learner than you know. Gladiator was released in May of 2000, but it did not win the Best Picture Oscar until March of 2001. Alas.