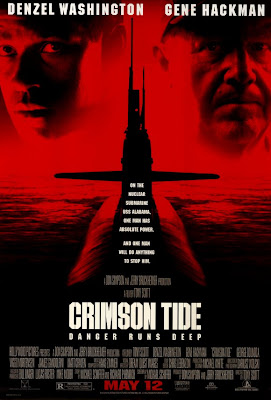 Fifteen years ago today, on May 12, 1995, the action flick Crimson Tide saw its release. Just five years after the release of The Hunt for Red October, the country was apparently hungry for another submarine movie. Directed by Tony Scott, produced by Don Simpson and Jerry Bruckheimer, and with credited writers Michael Schiffer and Richard P. Henrick, the film starred Denzel Washington and Gene Hackman. The intriguing part: Quentin Tarantino did a series of uncredited rewrites on the script (adding, no doubt, the Silver Surfer dialogue). I can't say that I was ever a fan of this film, and I have no memories of any kind associated with it.

But that must have been a heck of a weekend for Tarantino. That Friday, he saw the release of this film, and the night before, May 11, 1995, NBC aired the episode of "ER" he had directed (which we here at Chronological Snobbery recalled in some level of detail in yesterday's post).

One of the greatest movies of all time. Sometimes I put it on and just listen to the audio and wonder if I will ever get to write something so perfect.

Tarantino also did the thinly veiled racist monologue about horses at the end -- that led to a confrontation with Denzel that ended with Denzel punching him in the face.

Or at least that's the story I heard.