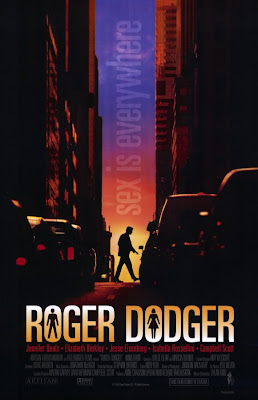 Most Hollywood films are lame, lame, and exhaustingly lame. The same cannot be said of 2002's Roger Dodger. Written and directed by Dylan Kidd, and starring Campbell Scott as the title character, the film also features the always lovely Jennifer Beals, Elizabeth Berkley, and Isabella Rossellini. In it, the always entertaining Scott portrays New Yorker Roger Swanson, a cynical cad, who dispenses practical (and sordid) relationship advice to his visiting sixteen-year-old nephew, Nick (Jesse Eisenberg, who you might recognize from last year's Zombieland). Think of Roger as the evil opposite of the character Scott portrayed in Cameron Crowe's Singles a decade before. Hardly the sort of tame wisdom of The Tao of Steve variety, Roger's shtick sends a single evening into a downward existential spiral from which there may be no escape. 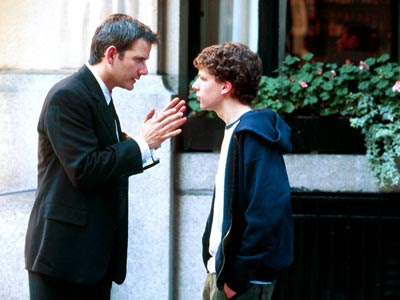 Swanson is no gentleman. The film opens with a scene showing him holding court at a restaurant, prognosticating the coming irrelevance of men in a not too distant future ruled by women. He always seems to know what to say and how to say it; he has an articulate retort to every remark. He's brash, he's confident, he's irreverent. In fact, the film's title comes from a childhood nickname bestowed upon Roger, who could talk his way out of any difficulty. Further, he prides himself on his ability to deconstruct women into a predictable stereotype. In one particularly illustrative scene, he encounters a young and nameless newcomer to the city, played by Morena Baccarin (depicted below), who Roger is able to categorize in just a few minutes. This verbal shakedown scores him little points with her, and he is left to drink alone at the bar. But in his unusual mind, he would rather be lonely and justified than kind and with company. 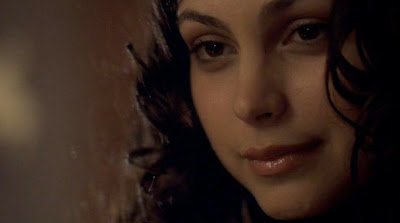 It is for these reasons that Roger's nephew comes to visit him in New York. You see, Nick, is a sensitive soul, who, despite his sweet nature, comes to New York on a mission: garner some experience with the ladies, and best case, lose his virginity. Once he finds Roger, the two scour Manhattan for opportunities to accomplish that objective. As a part of this tutelage, Roger instructs Nick that "sex is everywhere," and in a curious sequence, the two men roam the streets of Manhattan, identifying different women of interest and ways in which to perpetrate the male gaze upon them. Later, at a bar, they encounter Sophie (Beals, depicted below) and Andrea (Berkeley), both of whom are intrigued by Nick's youth and his claim that he has bet Roger $1,000 that he cannot convince a woman to fall in love with him that very night. (That wager, of course, is a ruse perpetrated by Nick and Roger to intrigue the women, which works, because they spend a good portion of the evening speaking frankly about relationships and sex.). This exchange gives Nick a good deal of perspective on the female mind, and Sophie, more than two decades Nick's senior, offers him a tender kiss when Nick reveals he's not done that, either. But the novelty of the new friendship wears off for Sophie and Andrea when Roger increasingly interjects with crude remarks designed, ostensibly, to assist Nick's efforts. 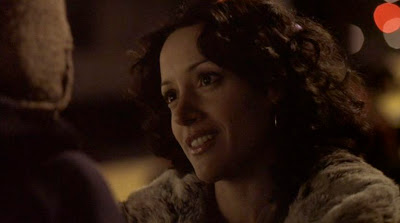 Roger is not as cool as he purports to be. After Joyce (Rossellini), his boss, terminates their secret romance, he spends the remainder of the film attempting to win her back in increasingly creepy ways. First, the day before Nick's arrival in the city, Roger attempts to gain access to Joyce's apartment late one drunken evening, but he is thwarted by her doorman. The following night, he, with Nick in tow, crashes a party at the apartment. When he is discovered, he causes a huge scene for all to see (save for Nick, who is facing his own moral dilemma in a bedroom with Donna (Mina Badie), a drunken co-worker of Roger's). By evening's end, Nick's mission is not yet a success, and the two must resort to the "fail safe," a underground brothel. A crisis of conscience ultimately prompts Roger to forcibly remove Nick from that den of iniquity.

In his review, Stephen Holden at The New York Times was almost smitten with Scott's character:

One of the juiciest male characters to pop up in an independent film this year, Roger is the latest in a new breed of misogynous screen baddies introduced by Neil LaBute's films ''In the Company of Men'' and ''Your Friends and Neighbors.'' Although he can be charming, years of working his Machiavellian sexual ploys have rendered them rancid. Roger says he can read women's minds just by studying their faces. But when he psychs out possible conquests, his telepathic insights drip with hostility. When a woman in her 40's says she is waiting for her fiancé, he snidely warns her that her future husband will dump her after he wakes up one morning and realizes how old she is.

The role of Roger is a small coup for Mr. Scott, who is normally the quintessence of earnest sincerity on the screen. With a teaspoon of vinegar added, the same qualities this brilliant actor uses to project an empathetic sensitivity curdle into something smarmy and ferretlike, and his rich oratorical voice assumes the wheedling, coercive tone of a snake oil salesman. Watching his performance, I kept imagining what Kevin Spacey, who has played a number of Roger-like reptiles, would have done with the role. Because Mr. Scott is a more soulful actor, he makes Roger indelible by inflecting him with a hint of tragedy.

Usually, the dialogue in these sorts of indie flicks is overdone, but here, it's just right, especially as delivered by Scott. The following exchange between Nick and Roger takes place at Joyce's apartment party, just as the evening is beginning its inevitable decrescendo:

ROGER: There's an incredible moment that happens when a party passes its apex, its peak. As if by magic, suddenly every person in the room is acutely aware of the time. It is at that moment that the fear hits.

ROGER: The fear of the empty apartment.

ROGER: That is more than most people can stand. Desperation creeps into the room like a fog. Eyes begin to search the crowd anxiously. Standards are drastically lowered. I mean, it's palpable.

By the film's final scene, we learn that Nick may well be the better for his impromptu trip to New York, although the experience certainly had its angry and emotional ups and downs.


Kidd's style of direction is very cinema verite; he opts for a documentary-style approach and an almost Dogme 95 style of lighting (which is to say that there is very little artificial light). This complements the film and gives it an immediacy that works with the narrative and the protagonists' end of the night deadline. One interesting component of the film is it's original music, particularly prominent during cab ride sequences, which you can sample in the YouTube video above. Below, you can find the official Roger Dodger film trailer.

"Think of Roger as the evil opposite of the character Scott portrayed in Cameron Crowe's Singles a decade before."

Heh, well said! I never thought of this before but you're right. I also dig the cinema verite camerawork and this gives the film loose, almost improv vibe. I really felt that Campbell Scott was fantastic in this film and gave his character a kind of unpredictable air, like you weren't sure what he was going to do next and part of the fun of ROGER DODGER is seeing where his character takes us next.

Thanks for the kind words. I seem to remember that I first stumbled across this movie on DVD in 2002, shortly after its release. At that time, I had just subscribed to Netflix, and was renting things that seemed interesting without really knowing anything about them. I watched a lot of bad movies, but a few gems, including this one. I've recommended it to folks for the past eight years. I suppose it was about time for a blog post on it.