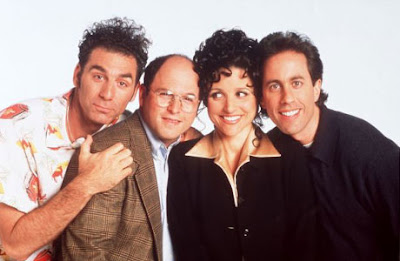 How puzzling it is to turn on the television and realize that each syndicated episode of "Seinfeld" is at least twelve years old. Twelve years ago today, on May 14, 1998, the final episode of "Seinfeld" aired, leaving most viewers perplexed and unsatisfied with the conclusion of the series. The plot device: a criminal trial brought after the protagonists violate a Good Samaritan law, leads to the introduction of character evidence, which in turn permitted the producers to revisit well-remembered bits from the show's history. It is difficult to imagine the 1990s without Jerry Seinfeld, Jason Alexander, Michael Richards, and Julia Louis-Dreyfus. The general sense of dissatisfaction with the finale lingered for a decade or so, but was very recently and partially remedied by the most recent season of HBO's "Curb Your Enthusiasm" (in which "Seinfeld" co-creator Larry David, playing a fictional version of himself, organized a reunion show of sorts). But today, it is not the quality of the series finale about which I will write, but the fate of the show's actors.

The fates could have been kinder to the "Seinfeld" cast, at least with respect to their post "Seinfeld" careers. Certainly, the case of "Seinfeld" have not seen the levels of success they enjoyed in the 1990s. Little that they have done has been memorable (and Richards, in fact, has courted unforgivable controversy for his inflammatory onstage antics). I sometimes wonder what it must be like to be an actor, years after the role for which you are most famous, trying to find footing again in the profession and essentially competing against your younger, funnier self in syndication. (This was a theme explored somewhat in "The Comeback," the HBO series starring Lisa Kudrow as an aging former sitcom star attempting to land a new series despite her age and former program's great prevalence in reruns). 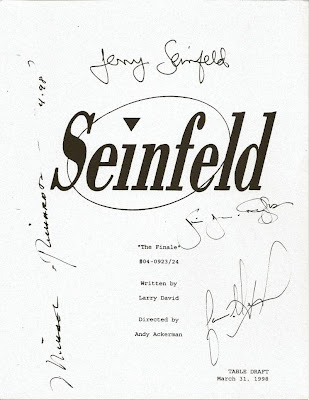 Yes, to me, the finale was a clever take on the all-to-common, disappointing clip show. I was happy, though, that it was sentimental, but not too mushy!

I didn't get into Seinfeld until well after it went off the air. I'm happy that it has had such a successful run in syndication.

I think Julia Louis Dreyfuss' show "New Adventures of Old Christine" is pretty good. Certainly no Seinfeld, but Julia brings spunk and character to the show that many sitcoms these days seem to lack. So she deserves props for that!