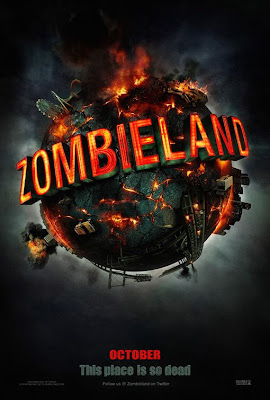 This past weekend, I watched Zombieland. Written by Paul Wernick and Rhett Reese and directed by Ruben Fleischer, the film stars Woody Harrelson, Jesse Eisenberg, Emma Stone, and Abigail Breslin, all as survivors of a plague that has turned the world into a horde of zombies. It's a fun flick, though at times, it seemed it didn't know what it wanted to be. Rom zom com, a la Shawn of the Dead? Modern zombie action flick, a la the 2004 remake of Dawn of the Dead? Or the hipster flick, Adventureland (also featuring Eisenberg), but with zombies? I enjoyed the film, as I do most zombie movies, but it prompted the following five questions which deserve answers.

1. Jesse Eisenberg finds himself in the Michael Cera role in his films: the geeky, socially awkward young man who fumbles about with women. Do you think that Eisenberg, when he realized that he was up for a part in zombie flick, thought to himself, "Gee whiz, finally a film in which I won't play a geeky adolescent?" Guess again: Eisenberg plays Columbus, whose social awkwardness is prominent in the film and in fact serves as a key plot component. (To boot, his introverted nature prompts his personalized set of survival rules in the zombie-infested world.). He develops a crush on Wichita, played by Stone, with whom Eisenberg has zero chemistry.

2. Prior to the zombie apocalypse, Columbus attends college in Austin, Texas, where he spends most of his time hidden away from the world in his apartment on his computer. He first learns of the zombie menace from "406," his generically hot blonde neighbor (Amber Heard), who he inexplicably refers to by her apartment number. Apparently, Columbus and 406 have developed a platonic friendship in which he consoles her after she experiences some type of emotional hardship. He fancies her, but she uses him solely as a prop. In a flashback, we see the two of them on his couch, he pining away for her, she relating a story about an unusual homeless man who bit her. They fall asleep on the couch, but when he awakes, she is a full fledged zombie, who proceeds to chase him around his very, very large apartment. Knowing a bit about the sizes of apartments in Austin, Texas, I can say that no college student could effectively elude a zombie for as long as Columbus did in an average sized apartment. The problem: His apartment is far, far too large for any college student, much less one in the Texas capital city. What gives?

3. Further, how does a film in which the protagonist is a college student in Austin not take place in Austin, or even have a single scene set in that city? The film opens in Garland, Texas, which the narrator sees fit to dismiss as post-apocalyptic in nature even before the zombie apocalypse.

4. Much ado is made of the characters' attempt to make it to Pacific Playland, an amusement park in Los Angeles. When they arrive in the City of Angels, though, there are very, very few zombies. They see a handful on the streets of downtown L.A., which seems puzzling, due to the city's size and population. Later, when Wichita and her young sister, Little Rock (Little Miss Sunshine's Abigail Breslin) arrive at the park and activate the carnival lights (which serve to attract the walking dead to that location), less than a 100 zombies appear. Los Angeles is the second most populous city in the United States. Where are all the zombies? 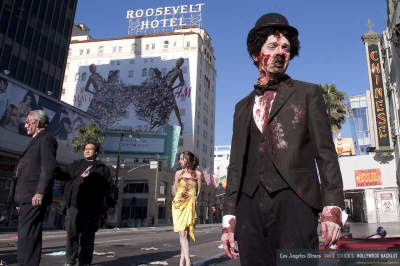 5. Skilled zombie killer Tallahassee (Harrelson) craves but one thing in the film: a Twinkie. He spends much time looking in abandoned grocery stores for this snack cake, suddenly elusive in the new zombie world. Can you imagine the product placement meeting between the producers and Hostess? "Uh, yeah, our psycho zombie killer character, played by Woody Harrelson, really wants a Twinkie to help him cope with all this killing of the undead. Can we use your logo and reference your products?" Um, okay.
Posted by Ransom at Monday, May 03, 2010
Labels: Films of the 2000s, Horror, Zombies

This entire movie should have been a short film, completely contained to the group's stay in the mansion.

I watched some of the bonus materials on the DVD and one included commentary about how they planned the zombie population from one town to the next. It makes sense insofar as, by contrast, there were more zombies in Los Angeles than any of the small towns they'd been shown in previously. (Also, to Ryan S., apparently it was originally being filmed a pilot for a TV series, and they had to expand it later as a feature film, though the mansion part was one of the things added on later.)

And you're right, his apartment was way too big for a college student. What did impress me about that scene though was Amber Heard's performance.

The whole Twinkie thing was a little lost on me. I mean, I get it, but I didn't like it ... and I don't think I can explain why. It's more than just that I don't like Twinkies, but somewhere more along the lines of I thought it was a really stupid idea for a plot device. And the whole "pacific playland" thing was just mediocre. I'm sorry ... but the world is full of zombies and you're going to draw attention to yourselves by lighting up an amusement park? Sorry, but if survival is a priority, I'm not buying it.

Gripes aside, I also really enjoyed the movie. It was funny and Woody Harrelson was badass. I really would have liked to see them utilize the "rules" mechanism more (He had something like 31, but we only ever learned about 5 of them ... what's with that?), and think it could have made the movie better and afforded it more focus.

The problem, I think, was the scope of the film. In attempting to be a cross country road trip movie (complete with a zombie apocalypse), the writers bit off more than they could chew. Shaun of the Dead wisely confined itself to one locale. Some zombie films limit themselves in time and scope, but this film, in choosing to depict the American landscape several weeks into the apocalypse, should have shown a land completely overrun with zombies. However, the middle of the film, when Columbus and Tallahassee first encounter Wichita and Little Rock, is largely and conspicuously zombie free. Make the zombie film, make the relationship film, or try to find a way to create a curious melange of both. However, don't switch from one genre to the other and back again. (On the zombie apocalypse large scale front, I am anxiously awaiting the film adaptation of Max Brooks' World War Z, which if you have not read, you must.).

Abbytron, I am with you on the Twinkie thing. Like so many a "Saturday Night Live" sketch, it was a single joke that went on for too long.

Also at the end of zombieland Columbus fights the clown but his gun runs out of shells. After the fight they go find Tallahassee who is looking for a twinkle. Columbus uses his double barrel and blows them up. But he ran out of ammo before an throws the gun on the flow

The twinkie joke was not overplayed, but now with the closure Hostess and the liquidation of its assets...