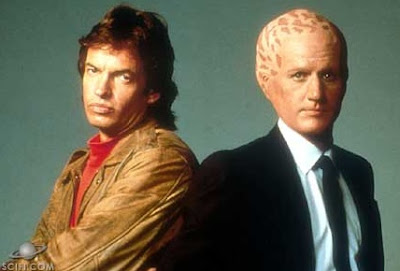 Above: Gary Graham and Eric Pierpoint in TV's "Alien Nation."
Twenty years ago today, on May 7, 1990, the television series "Alien Nation" broadcast its final episode, entitled "Green Eyes." Based on the 1988 film of the same name (which starred James Caan as a hard-boiled human cop and Mandy Patinkin as his alien sidekick), the spin-off series featured two new and lesser known actors assuming those two lead roles: Gary Graham (Robot Jox) in the Caan role and Eric Pierpoint in Patinkin's. Debuting in 1989, the series lasted but one season, thought it returned for five television movies from 1994 to 1997.

The mythology of the film and the series was that a large ship of alien visitors, called the Tectonese, or colloquially, the Newcomers, have come to Earth and must be assimilated into Earth culture. (Thus, in theme, and in tone, the original film was not unlike last year's District 9, which obviously appropriated a number of elements from it.). As the film progressed, viewers learn that the 300,000+ Newcomers were actually part of a slave labor force, and that the drug used to pacify them during their interstellar journey, has now hit the streets of Los Angeles. The film was much darker than the later series, which was significantly watered down, no doubt due in part to the constraints of early 1990s network television. What made the original film most interesting, and the series somewhat interesting, was the at times tense relationship between the human cop and his alien partner. Both Caan and Graham played their shared character with a touch of xenophobia, which ebbed and flowed as they worked alongside an alien officer.

Sure, it was a low budget, mostly tacky sci-fi series on the Fox Network (exactly the type of series that would now be shot in Vancouver and aired on the Sci-Fi Channel). But back then, the series, despite its faults, captured my interest, mainly due to the good will earned by the original film. I've not watched an episode of the series since its original run (though it's possible I caught one or two rerun episodes somewhere in the mid-1990s). I don't recall watching any of the subsequent TV movies which aired in the mid-1990s, as those were my college years, and it was quite difficult in those days to learn what shows aired and when without the assistance of a DVR.

Whatever slight fondness for the series remains, I do not plan on revisiting the series here. Looking back at it from 2010, it seems to be precisely the type of show that would not hold up well, both because the television viewers of today are more sophisticated than they were in 1990, but also because I myself like to think I have a more refined taste than my young 1990 self. Thus, were I to rent the series, I'd do violence to whatever memory of it remains, as I can't imagine that I would enjoy it in the least if I elected to view it again these days. Oh, well. 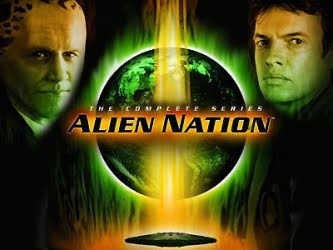 You know, he does, doesn't he?