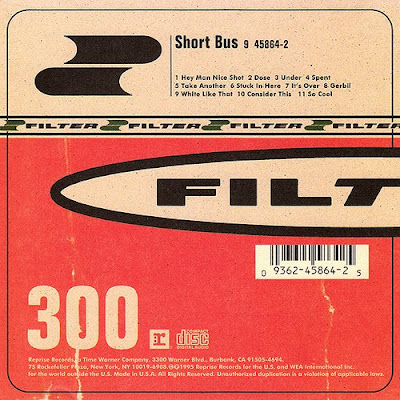 Released fifteen years ago today, on May 8, 1995 was Short Bus, the first studio album by Filter. Today, the album is mostly memorable for its inclusion of the single, "Hey Man Nice Shot," about the macabre 1987 press conference by Budd Dwyer (which Chronological Snobbery analyzed in some level of detail in this post from January of 2008). With its ominous opening bass line, the song received heavy attention and earned appearances on a number of 1990s television shows (including "The X-Files."). Listening to it today, it sounds very 1990s.
Posted by Ransom at Saturday, May 08, 2010
Labels: 1995, Alternative Rock