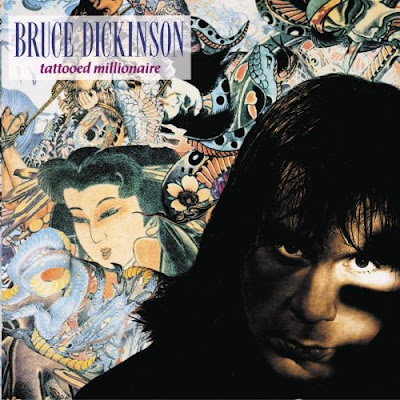 Twenty years ago today, on May 8, 1990, Iron Maiden lead vocalist Bruce Dickinson released his first solo album, Tattooed Millionaire. It's a mostly forgettable album, really, other than that chorus of the title track curiously refrained, "I don't want to be a tattooed millionaire," a strange goal to avoid, particularly for the lead singer of a famous heavy metal band. (Another historical footnote: The album also included a cover of David Bowie's "All The Young Dudes," originally made famous by Mott the Hoople and covered five years after Dickinson's ablum by World Party on the soundtrack to the 1995 film, Clueless.). The Times (UK) noted that the solo album was "[g]enerally more melodic than Maiden, with a distinct AC/DC flavour in places."1

I myself remember this Dickinson album for two reasons. First, at that time, I was listening to Maiden's The Number of The Beast (an album previously reminisced about at this site in more detail here). Second, at a 1990 radio station promotional event at the local Sound Warehouse, I won a copy of the promotional single, which made me feel very metal.