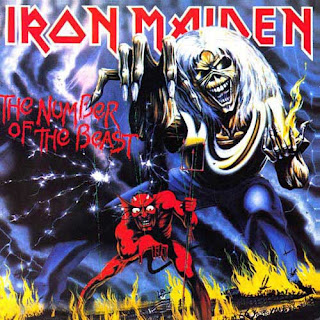 Ah, the power of progressive heavy metal, if that's what you want to call it. Although they weren't as popular on MTV, there were once hard rock bands who aspired to compose songs about more than sex, drugs, and rock and roll. Imagine! Some of them even wrote about literature, religion, and 1960s British television shows. In the 1980s, Iron Maiden was such a band. Most children of the 1980s remember them more from their album covers, or rather, their over protective parents shooing them away from record store displays featuring their album covers. Like so many bands from the 1980s that remain together in 2009, Iron Maiden is now a parody of itself, releasing hits collections and live albums to capitalize upon once, but not future, fame.

1982's The Number of the Beast had all the makings of a record that Tipper Gore and the PMRC would despise: an evil and ominous sounding album title, an album cover featuring both a devil and a demon of some sort, and hard guitar oriented power metal. Catchy, and a little self important, the album was the first to feature Bruce Dickinson as the lead singer (a fact I did not know until I began to prepare this article). Apparently, Dickinson would also take an extended leave of absence from the band in the 1990s, although that was well after the band lost any claim to relevance in the realm of popular music or heavy metal. Whatever the case, the album is upbeat and enjoyable, even if it is bent on creating some type of literary or artistic metal. Further, it's nice to see something from this genre not focused on sordid sexual excess.

Most fun, of course, is "The Prisoner," a song quite clearly based on the 1960s psychological suspense television program from Britain. (Iron Maiden would revisit this TV show in another song, "Back in the Village," on their 1984 album, Powerslave.). The album's title track is apparently still a staple at the band's live shows, all these years later.

Looking back, it's difficult not to compare and contrast the power and ambition of Iron Maiden's rock with the anemic modern rock that would follow it a decade later. Although the purveyors of cool cast their glances of disdain upon bands such as these, one thing is for certain: Dickinson could sing, and his guitarists could truly play. How can one say that the guitarists from say, Pavement, were superior to those of Iron Maiden? How can one say that the vocalists from, say, the Flaming Lips, was superior to Dickinson? Looking back, the hipsters can only say that they weren't as "cool," but that's all the hipster ever say, isn't it?
Posted by Ransom at Sunday, February 28, 2010
Labels: 1982, Hard Rock

Dude, any hipster that don't love Iron Maiden is not a good hipster. Iron Maiden is cool in hipster-ville. Although the hipsters I know lean toward later Maiden.