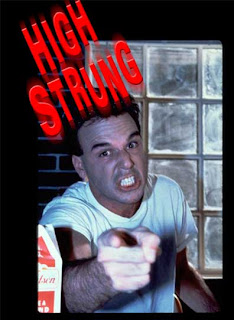 High Strung (1994), directed by Roger Nygard, is by no means a great film. But it has its moments. I first saw this comedy, the bizarre tale of Thane Furrows (Steve Oedekerk), as a freshman in college, late at night, at party full of slightly intoxicated film students. Featuring Steve Oedekerk as Furrows, this film has some genuinely amusing moments (even more so if the viewer is aided by alcohol), even if the film's pacing is a bit uneven at times. Oedekerk's Furrows is an angry and bitter fellow with little patience for the compromises we are all forced to make with the world. That type of attitude makes him not the best at his profession as a greeting card writer. Throughout the film, he offers us his views on life and the universe, including this gem:

Wisdom, indeed. Joining Oedekerk in the cast are Jim Carrey (who plays Death, in a role before he was Jim Carrey, Hollywood megastar), a young Kirsten Dunst, Thomas F. Wilson (Biff from Back to the Future), Denise Crosby (Tasha Yar from Star Trek: TNG), and last, but certainly not least, Jani Lane, the lead singer of Warrant. That's right; the guy who sang "Cherry Pie" in 1990 is in this movie. Despite the fact that it features actors who later became much more famous, the film has never been released on DVD. The original home video release is long out of print. Diehards can find copies on, gasp, videocassette by searching eBay and the like. As far as early 1990s comedies go, it's fun and sometimes clever, certainly something that should be readily available for rental or purchase considering the actors in it who later became famous. But it is apparently not to be. (See here for more on this film from Oedekerk's official site. It appears that he, or his web site administrator, originally had grander, but unfulfilled plans, for the page on his site dedicated to the film.). 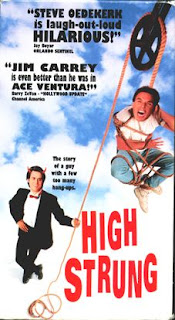