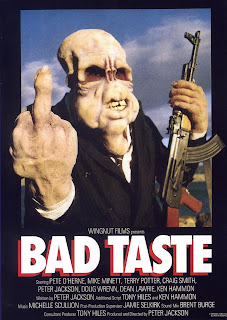 Having recently watched again some of the more well known flicks directed by Peter Jackson, I decided to watch his first release, Bad Taste, from 1987. Basically, Bad Taste is a zombie flick, although the "zombies" are actually aliens who, at the risk of great discomfort, transformed themselves into human form. Much is owed to George Romero and his Living Dead trilogy. Viewing Jackson's incredibly low budget film, as well as the making-of documentary which accompanies it on the DVD, really illustrates how far Jackson has come as a director. For Bad Taste, Jackson constructed his own Steadicam at the cost of $15, and he baked the masks of the creatures in his parents' kitchen. Compare that to the $300 million the studios gave him to create the three installments of J.R.R. Tolkien's trilogy. The documentary is inspiring to the would-be filmmaker, as Jackson's ingenuity (and his utter skill at stretching a dollar to the maximum degree possible) is showcased to a great degree. If he could do so much in the way of crude special effects with so little money, what could an aspiring director do with equally meager funds for a film which did not require special effects at all? (The documentary also has clips of Jackson's earliest home movies, including some footage from a film called "World War Two," which Jackson made as a pre-teenager. Sorry, I can't bring myself to say "tween."). 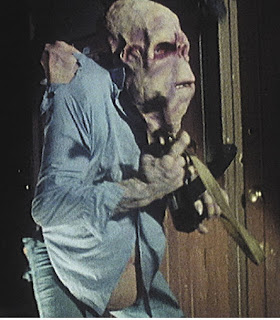 My first introduction to Jackson's oeuvre was in college when one of the members of the crew at the student television station screened a double feature of Jackson's films. In so doing, he exhibited the violent gross-out puppet extravaganza, 1989's Meet the Feebles, and the equally disturbing 1991 film, Dead Alive. Soon thereafter, I saw the excellent Heavenly Creatures from 1994 (which was my first introduction to the lovely Kate Winslet), and after that, I trekked to see The Frighteners (which featured the one, the only, team-up between Jackson and Michael J. Fox) after work on the first day of its release in 1996. I think I was the only one present in the theatre for that showing. When I heard that he was going to direct the Tolkien trilogy, I was skeptical -- indeed, I was almost certain that it would fail, as fantasy has never really been a successful genre at the box office. I wondered what would happened to the second two installments if the first chapter tanked. Would they release them? Would the studio funding for post-production dry up? Who knew? But, obviously, failure was not meant to be for the trilogy.

See here for the Ultimate Bad Taste Fan Site (and here for the original version of that site).
Posted by Ransom at Wednesday, February 03, 2010
Labels: 1987, Films of the 1980s, Horror, Zombies