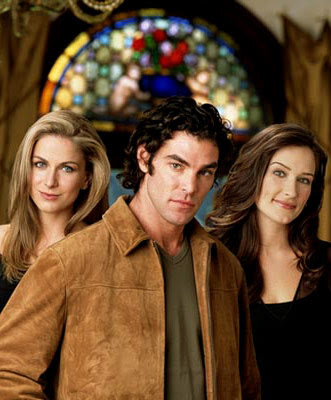 Seven years ago today, on February 17, 2003, the finale of the television reality show "Joe Millionaire" aired. A quick refresher: This was one of the first reality in shows in which the contestants were tricked into believing a critical fact was simply not true. In fact, the contestants, all female, were led to believe that Evan Marriott was a millionaire when in reality he was just short of being a pauper. Even to this day, reality television remains the trendy schadenfreude , and even those of us at Chronological Snobbery are not immune from the strange transfixing power it holds over the nation. After weeks of a cynical ploy implemented for the entertainment of millions, the finale is a sugar-coated and sappy fairy tale cliche? Since when did the Fox Network, perpetrator of "Married . . . with Children" and "When Animals Attack!", become the plaything of rank sentimentalists? Evan receives no comeuppance for his dastardly scheme to dupe women into believing that he was as rich as Mr. Burns? Yes, of course, I was just as amused by the program as everyone else seems to have been, but I was hoping that perhaps Evan would-be the victim of some additional ploy known only to the network suits. It was not to be. The concept was a bit of a one trick pony; one the ruse was perpetrated, it could not be employed again, as the secret was out. The producers were undeterred; they tried again, this time using European women (under the assumption that they were unfamiliar with American reality television). But the magic, if it can be called that, was gone.
Posted by Ransom at Wednesday, February 17, 2010
Labels: 2003, Television

I, too, watched all of Season 1 of Joe Millionaire. It debuted not long after "Bachelorettes in Alaska" as Fox attempted to cash in on the dating show sub-genre created by ABC (but which seemed to be, in fact, birthed by the ill-conceived "Who Wants to Marry a Millionaire?", which had drawn such bad press, Fox claimed it was now steering away from tasteless programming.)


In subsequent years both The Millionaire and his selected bachelorette publicly stated the show was more or less scripted, which should come in no way as a surprise.

Oddly, winner "Zorah" did appear on TV ads on and off for NutriSystem, which seemed an odd fit as I couldn't see much difference between the before and after pictures (she seemed healthy in both). I assume star Evan Marriot is now trolling the LA night life scene and squeezing out the last of his celebrity.

This was truly the first and last reality tv show I've ever watched.My mom and I got truly into it,wailing at the screen,shaking our fists,drinking fruity wine and by and large acting madly.Really,now that I think about it, that was a hell part of the fun.Possibly mom and I have to locate some new loathsome show to get into...