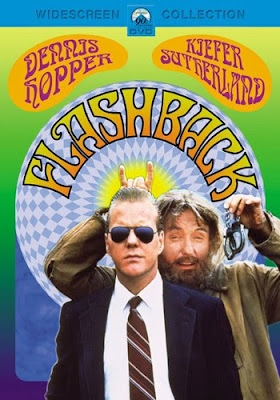 Twenty years ago today, on February 2, 1990, the film Flashback was released. It's a mostly forgettable road movie in which conservative, by the book FBI agent John Buckner (Kiefer Sutherland) must escort aging New Left radical Huey Walker (Dennis Hopper) to trial for allegedly disconnecting Vice President Spiro Agnew's railcar back in the 1960s. Think of it as lowbrow version of Midnight Run meets a severely watered down Easy Rider. Eleven years later, both Sutherland and Hopper would appear together in the first season of TV's "24."

The film's promotional materials made use of two quotations made by Hopper's character (one of which was particularly self referential, though no on said "meta" back then):
You see, it's supposed to be clever because Hopper is playing a '60s radical who references a 60's counterculture film in which Dennis Hopper himself appeared. Get it? You see? Oh, well.

The original theatrical trailer for the film is as follows: