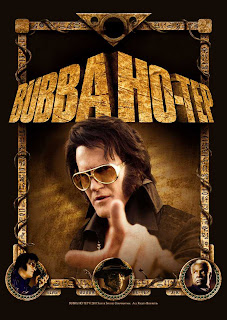 On Monday, October 8, 2002, actor Bruce Campbell exhibited his then-new film, Bubba Ho-Tep, at the River Oaks Theatre in Houston, Texas. Prior to the film, he spoke and conducted a brief question and answer session for the crowd. This is a summary of that event.

In the film, a bizarre horror flick, Campbell plays an elderly Elvis Presley who must fight an ancient Egyptian mummy to save his nursing home. Campbell talked a bit about the film and remarked that the Houston screening might very well be just the second or third time the film had been seen by theatre audiences. He would later say that it was a true independent film, as no Fortune 500 company had bankrolled it, nor was a major distributor handling it. Disdainfully, he remarked that it wasn't the type of film in which you would see Tom Cruise holding a Taco Bell product. He envisioned Paramount Pictures executives kicking around the idea of making a film about an elderly Elvis with prostate cancer battling Egyptian mummies with Ossie Davis as a character who thinks he's JFK. Campbell recalled that Davis' voice was so formal and proper that it was infinitely amusing for him to hear Davis remark upon Egyptian creatures who can only suck the soul from a human being through a particular orifice. Indeed. 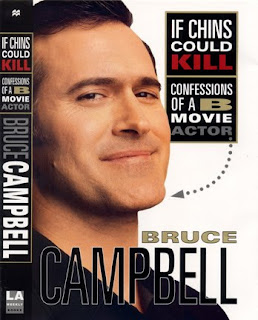 Campbell then took questions from the audience, and tattooed arms immediately began to rise in the theatre. The usual questions were asked - "Will he be in Spider-Man 2?" [Answer: Perhaps. Campbell noted that director Sam Raimi had already proclaimed that Campbell would return for the sequel. Campbell joked that he suspects he'll simply have a minor role in which he will get run over by a bus, although when the film was released in 2004, Campbell played an usher who denied Peter Parker admittance to Mary Jane Watson's play.] "What about Evil Dead IV? Now that Raimi is a darling of Hollywood?" This was the question of the hour, but Campbell appeared baffled for a moment and then did not provide anything helpful in his answer. (Seven years later, still no Evil Dead IV, but that is probably for the best for many, many reasons.).

Obviously caring more about sounding clever than asking a substantive question, one fan asked which director could best handle the "Montana Gunn" scene when the inevitable film rights to his book were sold and production of a film version began in earnest. Campbell quipped that only Scorcese could master the tension required of that sequence. Someone then asked what his next project would be, and his reply was a bit of a surprise, at least to me: not another film, but another book. He explained that it would be a light-hearted look at - of all things - relationships. The title, of course, reveals that he won't abandon his particular brand of humor: Make Love! The Bruce Campbell Way (which would be released three yeas later, in May of 2005). In response to one question, Campbell revealed that he does not play with the Evil Dead action figures. ("Though I do play with my boom stick."). He had no meaningful stories to tell about his ill-fated, early 1990s TV series "The Adventurs of Brisco County, Jr." ("We laughed and laughed when it was canceled. Was that what you had in mind?"). When asked about what he enjoys reading and watching, he raved about Roman Polanski's 1976 flick, The Tenant, which he described as a tense thriller which needed no expensive digital effects. He also said that since he works in "fantasy land" all day, he likes to read travel and non-fiction books, rather than immerse himself in even more genre fiction.

When asked about working with Jim Carrey in The Majestic, he said that he never met Carrey when working on that film. Apparently, Campbell's scenes had to be filmed first, so that they could be incorporated into scenes to be shot later. (Having not seen that film, even to this day, I didn't really get that.) However, he said that he ultimately did meet Carrey after production wrapped, and the real trick was making his way through the throngs of nervous Carrey handlers. ("He was a very nice man."). Someone asked about his short-lived TV series from 2000, "Jack of All Trades." ("So you're the one that watched it."). An ill-informed fan asked what he thought when he first read the script for Evil Dead. ("Well, I had already read it, as I helped raise the money to make it, so . . . .") What did he think of working on the 1996 film, Menno's Mind? ("Did you just want to pick some obscure movie to ask about?").

Someone asked Campbell if he had ever considered running for public office. He smirked and replied that he did inhale, so that might make matters difficult. (Not these days, not even then, when we had a president who had allegedly used cocaine.). However, he said he might consider it if the political climate changed dramatically enough so as to be forgiving of such an alleged indiscretion. (It certainly has.). He then laughed and remarked that on that day he would return to Houston to run for Mayor with the help of a few friends from Enron. We're still waiting.
Posted by Ransom at Wednesday, February 10, 2010
Labels: 2002, Films of the 2000s, Horror

Very funny--BC's sarcastic humor is a hoot. Enjoyed reading that. How on earth can you remember so exactly what was said from 8 yrs ago? LOL

Wouldn't it have been more useful to link to Menno's Mind IMDB page than the one sentence Wikipedia entry?