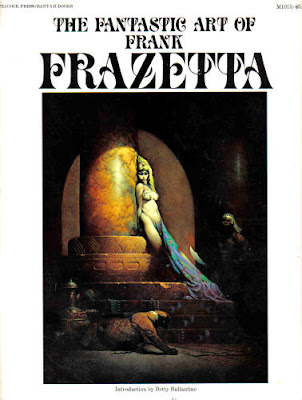 The comic book, science fiction, and fantasy artist Frank Frazetta died this week at 82 years old. Ryan S. at The Signal Watch offers forth some commentary on his art, life, and influence in a post far more articulate than anything I could put together on the man. In fact, I know very little about Frazetta, other than that he was a comic book artist of some renown. However, I do have one distinct memory that is in some way Frazetta related, though it has very little to do with the specifics of Frazetta's career. Back in the mid-1980s, I was a young child and aspiring comic book collector. I'd make weekly trips to Memphis Comics and Records, a now defunct shoppe. As a regular visitor, I came to know the shoppe and its layout quite well, and I remember seeing its hardcover art books in one corner of the store, including the book depicted above, The Fantastic Art of Frank Frazetta, originally published in the 1970s, if memory serves. As what would later be dubbed a tween, I never could muster up the courage to go peruse a book with that cover. And that, dear readers, is how I first came to know of the artist Frank Frazetta. Rest in peace.
Posted by Ransom at Sunday, May 16, 2010
Labels: Indie Comics, RIP