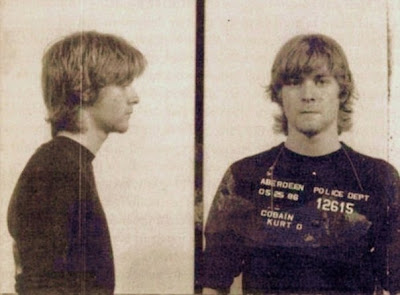 Twenty four years ago today, on May 25, 1986, Kurt Cobain was arrested for vandalism. What might have gotten Kurt so riled up on that Sunday? We can only speculate.

A theory: As fate would have it, Hands Across America, that ill-conceived do-gooder event, was held that same day. Remember that? It was a charity event, the goal of which was to have a human chain from one coast to the other, with all participants joined by holding hands. Surely, Cobain, the then would-be punk rocker had no patience for such displays of insincerity.

Perhaps related to the opening of 'Territorial Pissing' where he quotes, semi-derisively, the Country Joe and the Fish tune.

That song, "Get Together," was made popular by The Youngbloods, actually.

And it was Krist.

god that poor man's every action and lyric has been dissected into oblivion, until everything he ever said or did fits into the ideas people had about him. he was young and probably didn't think as much into what he wrote as everyone else does. "ainT goT no how whaTchamacalliT" is actually what he wrote. and it was freakin krist novoselic in the beginning of territorial pissings. geez Louise.

Kurt Cobain is a great guy, he had a great attitude and behaviour. Thank you so much for the nice collection of Kurt Cobain Quotes