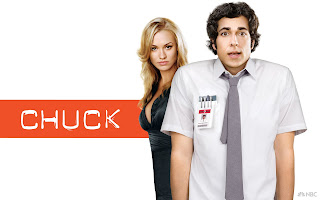 It's perfectly acceptable for a nostalgia blog to herald the new season of a new program when that program itself is fully immersed in 1980s nostalgia. NBC's "Chuck" struggled to be renewed, but NBC, in an uncharacteristic display of good sense, did renew it, and will be airing three episodes over the course of several days. The network is airing two hours this coming Sunday, and then an additional hour this coming Monday, which will become the usual air date for the weekly show. But don't take my word for it; watch this brief scene from the second season finale last year which sets an action sequence to a live cover of Styx's "Mr. Roboto," of all things: