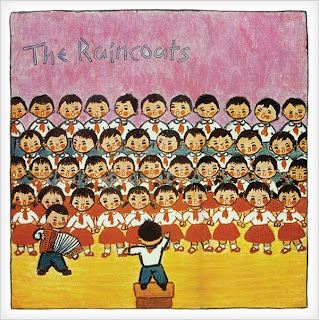 Today is the 55th birthday of Palmolive (real name: Paloma Romero), drummer for the punk rock groups, The Slits and The Raincoats. The Slits opened for The Clash during their 1977 tour and recorded a rather upbeat version of "I Heard It Through The Grapevine" on their 1979 debut album, Cut (although Palmolive had already left the band before that album was recorded). (The Kaiser Chief's essentially covered The Slits' cover on the 2005 charity compilation, Help: A Day in the Life.). The Raincoats gained a modicum of mainstream attention when Kurt Cobain professed a fondness for their music. The far better nostalgia blog Slicing Up Eyeballs recently reported here and here upon the interesting strategy The Raincoats employed when they reissued their late 1970s self-titled debut album (pictured above) last year. Their plan? Vinyl only. Why?
Posted by Ransom at Sunday, January 03, 2010
Labels: Punk