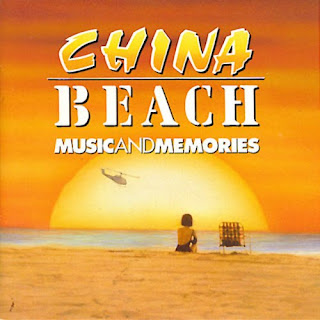 I am somewhat disconcerted to learn that I own a television soundtrack featuring a cover of Rod Stewart's "Reason to Believe," done by Wilson Phillips, of all groups. Yes, yes, I know the song wasn't originally done by Rod Stewart, but of course, his is the most popular version, and probably, the only one you know, dear readers. I picked the right week to reflect upon this pop culture gem, as Wilson Phillips' "Hold On" was featured this week (ironically) on the season premiere of "Chuck." But, in 1990, it was difficult to resist the charm, the allure, and the gravitas of TV's "China Beach," which featured the lovely Dana Delany. (It also featured Marg Helgenberger as a madam of sorts; although the supermajority of modern viewers would only know her as Catherine Willows from CSI: Crime Scene Investigation.). I understand that the series - never released on DVD - may never reach that medium due to disputes over the licensing rights for the songs originally featured during its broadcast run. (Ah, curses to the television producers who did not have the foresight to license the songs featured on their episodes in perpetuity for all media, including that not yet in existence.). But, its soundtrack, released in 1990, featured not only Diana Ross and the Supremes (their song, "Reflections," was the theme of the series), but also covers of "We Gotta Get Out of This Place" by Katrina and the Waves (with Eric Burdon!) and "Time of the Season" (originally by the Zombies) by Wendy Wall. Ah, 1990. Believe it or not, I originally bought this soundtrack 19 years ago, but sold it or lost it somewhere along with way, and repurchased a copy through the Internets just a week or two ago. I suspect that the disc may be out of print and/or hard to find, as it was more expensive than most used discs are these days. For good reason, perhaps?
Posted by Ransom at Thursday, January 14, 2010
Labels: 1990, Television

Wilson Phillips was also featured as an ironic character bit in this fall's roller derby flick, "Whip It!".

Whow ould have guessed that Carnie Wilson would be the one with her own career as a reality and game show fixture in 2010?

The music licensing bull also prevents one of the greatest family dramas ever from reaching the DVD medium as was aired: The Wonder Years.

I suspect "The Wonder Years," at least as originally aired, may never see the light of day on DVD. Some programs, in attempting to resolve this issue, have taken the step of using replacement or even sound-a-like music if they cannot acquire the rights to the music which originally appeared in an episode. That's not the way to go.

I loved China Beach way too much. If anyone is listening, release it on DVD! Find a way!!