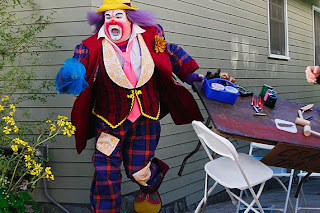 I had heard good things about ABC's "Modern Family," a non-traditional sitcom which avoids a laugh track and utilizes the same types of talking head interviews as "The Office" and "Parks and Recreation." It's always tough to build an interest in new shows, so slowly, a huge backlog of episodes built up on my DVR's hard drive. During the holiday break, I began to watch the show and was immediately surprised that I was actually laughing aloud at something on network television. Imagine that: a sitcom which provokes laughter. Unheard of, these days. In addition to being funny, it's also quirky and offbeat, but not annoyingly so. Whatever the case, after a few weeks off the air due to the holidays, the show returns tonight. Be sure to watch.
Posted by Ransom at Wednesday, January 06, 2010
Labels: Television

my sister and i watched an ep of this i guess around Thanksgiving. she loves the show and i was skeptical.

it was the kid's bday party episode and i too was pleasantly surprised. i look forward to seeing them all on Netfliks when they come out on DVD someday.