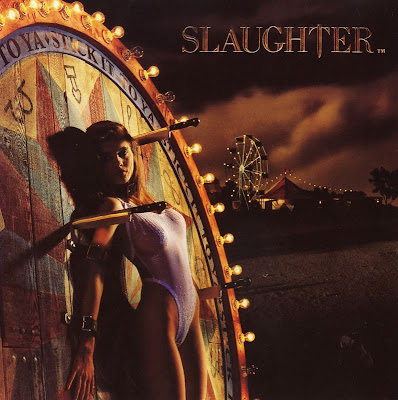 Above: The album cover for Slaughter's Stick It To Ya.
Twenty years ago today, on January 27, 1990, the hard rock band Slaughter released its debut album, Stick It To Ya. Yeah, yeah, I've lost any indie street cred by professing a fondness for this album, but if you were a young teenager in 1990, and you didn't like the band's single, "Fly To The Angels," you simply had no soul. It was an ethereal and nearly perfect rock power ballad.

In fact, the album had not one but two versions of "Fly To The Angels," the first being the extended version that was familiar as the popular single, the second being a shorter, purely acoustic version. (This was, after all, the dawn of the "Unplugged" era.). Whatever the case, the song must have drawn some initial criticism, for on Stick It Live, a five song live EP also released in 1990, lead singer Mark Slaughter introduced the song as follows:

This next song's about losing somebody very important in your life whether that be your mother, your father, your best friend, or whatever. It's not a song about glorifying death and it's not about suicide, because it sucks.

The PMRC need not have worried. As far as hard rock went, Slaughter was lighter and far less sordid fare than many groups. (They had songs called "Spend My Life," in which Mark Slaughter sang about wanting to spend the rest of his life with a particular paramour. Compare that to Motley Crue's "She Goes Down," released in 1989, and you get the idea.).

The fates were not kind to Slaughter after 1990. Although the band's debut album spawned a number of notable singles (including "Up All Night"), the group could not withstand the changing tastes of the album buying public in the early 1990s. Their 1992 follow-up LP, The Wild Life was far less popular (and far less interesting), and even an appearance on the soundtrack of the 1991 film Bill and Ted's Bogus Journey could not insulate them from the onset of grunge. The band's original guitarist, Tim Kelly, died in an automobile accident in 1998.

These days, they are mostly forgotten, save for "Fly To The Angels." Here's to you, Slaughter. 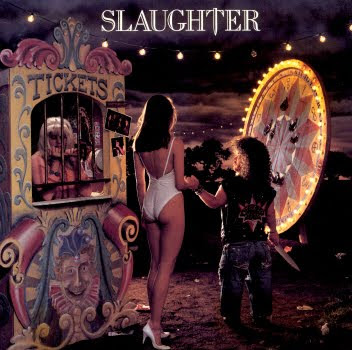 Above: The album cover for Slaughter's Stick It Live.
Posted by Ransom at Wednesday, January 27, 2010
Labels: 1990, Hard Rock

I believe their drummer was from Houston.