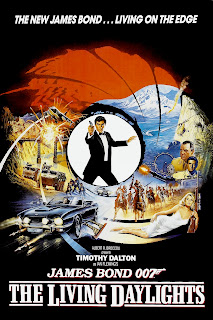 "A quick aside on [Timothy] Dalton: I think he gets a bad rap for his stint as James Bond. I thought he was actually a very strong 007, but stranded in two fairly awful Bond films. (Living Daylights had one of the drippiest love interests of the series, while License to Kill was an embarrassing attempt to modernize the series by taking its cues from "Miami Vice.") Stick him into Goldeneye or Casino Royale as his introduction, and his tenure goes very differently." - TV critic Alan Sepinwall, writing in this review of the recent Doctor Who episode "The End of Time," which featured the last appearance of David Tennant in the title role and Dalton as a villainous Time Lord bent on the destruction of all good things (1/3/10).

First, Sepinwall is correct that Dalton is underrated as James Bond. Though cinema history may judge him a placeholder to occupy the role in between the time that Pierce Brosnan was initially offered the role and the time that he could ultimately accept it, Dalton did fine in the two Bond installments in which he appeared, 1987's The Living Daylights and 1989's License to Kill. It's difficult to compare those two films to the later entries with Daniel Craig, simply because the films are products of very different eras. But by 1980s standards, Dalton did more than well.

However, to characterize the actress Maryam D'Abo as "one of the drippiest love interests of the series?" D'Abo played opposite Dalton's Bond as Kara Milovy, a cellist and would-be assassin. Alas, Mr. Sepinwall provides no support for his comment that Ms. D'Abo was drippy, much less one of the most drippy Bond girls of all times. (Considering the fact that both Halle Berry and Denise Richards are in the running for their awful roles, it is a curious statement.).

As for D'Abo, behold:

D'Abo also starred in the 1988 NBC science fiction mini-series, "Something Is Out There," alongside Joe Cortese. D'Abo played Ta'Ra, the medical officer of an alien vessel who teams up with a local cop, played by Cortese, to catch a xenomorph which escaped from her ship. (I don't remember enough about the series to tell you what exactly a "xenomorph" is.). The miniseries became a short lived weekly series, which lasted an additional eight episodes, although according to Wikipedia, the final two were not aired during the original run of the series.

Readers probably know D'Abo's cousin, Olivia D'Abo, better. She played Karen, the older sister on TV's "The Wonder Years" and appeared in a number of films in the 1990s, including 1995's Kicking and Screaming, which this blog previously profiled in 2007. She has also done a fair amount of voice work in animated films and series based upon comic books, including Justice League Unlimited, Batman Beyond, and Ultimate Avengers. Who knew? 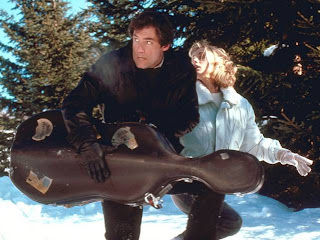 For a photo collage of both D'Abos, click here for the blog Starlet Showcase's entry on them.
Posted by Ransom at Friday, January 08, 2010
Labels: 1987, Films of the 1980s, The Week That Was

I liked Dalton, but as is mentioned, not really the films. Brosnan's entrance into the role was practically a wink at the audience and a caricature of Bond more than a character. Dalton did seem more like a guy who would wait for a license to kill someone than Craig's version of Bond, and handled the role just fine. I honestly liked him better than Brosnan.

And had no complaints about D'Abo, but I mostly remember that as the Bond movie where AIDS was now an issue, and the producers made it very public that James was no longer sleeping around. So D'Abo was pretty much it for women in the entirety of the movie. That was a lot of burden to carry.