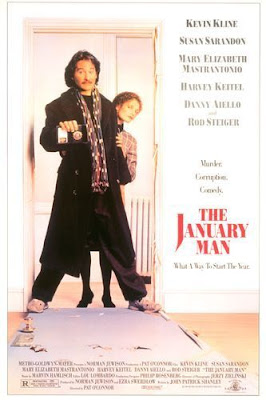 There's a reason why some films are left behind in the decades they were released, never to be remembered, recalled, or reminisced over in the years to come. One such film is 1989's The January Man, originally released twenty one years ago today, on January 13, 1989. Really, the film is only of note because it was the first film of Kevin Kline's to be released after 1988's A Fish Called Wanda (for which he won the Oscar for Best Supporting Actor) and the last film of Mary Elizabeth Mastrantonio's to be released before The Abyss, released in August of 1989. Kline plays a Beatnik former cop whose more by-the-book police commissioner brother, played by Harvey Keitel, of all people, lures him back to the force to catch an elusive serial killer. Mastrantonio, of course, played a love interest of Kline. (We, as viewers, are clearly meant to sympathize with Kline's offbeat character, who remains unappreciated by the law enforcement establishment despite his great skill as a detective.). Heightening the tension between the two brothers is the fact that Keitel's character's wife, played by Susan Sarandon, was once the true love of Kline's character. Ah, romance. What's curious about The January Man is that it is a very 1980s film, in style and tone, but as a would-be suspense thriller about police officers and their politics, it produces only boredom. (Compare that to the thriller Sea of Love, released just eight months later and starring Al Pacino, Ellen Barkin, and John Goodman, which maintained a sense of suspense and plot development. Both films feature a New York detective attempting to catch a serial killer, but Pacino and Goodman work so much better together in that film than do Kline and Keitel here.). One good bit about The January Man: Alan Rickman plays against type; usually, he portrays sinister villains, but here, he is the effervescent artist roommate of Kline's character. Whatever the case, yawn.

Verdict: Watch it only as a cultural relic and wonder why Kline chose this project.

The film does prompt the question: What ever became of Mastrantonio? She was in Scarface, she was in The Color of Money, she was in The Abyss, she was in Robin Hood: Prince of Thieves, and very little after that. (Let's not count the forgettable 1992 sexual thriller, Consenting Adults, which reunited her with Kline, who played her husband.). Wikipedia tells us that in 2005-06 she appeared in nine episodes of the procedural television series, "Without A Trace." But if anything has vanished without a trace, it was her from mainstream popular culture. But I speak too soon: She has apparently been cast in the upcoming season of Law & Order: Criminal Intent. Actors from the 1980s and early 1990s ultimately end up on episodic cop procedurals. Alas.
Posted by Ransom at Wednesday, January 13, 2010
Labels: 1989, Films of the 1980s