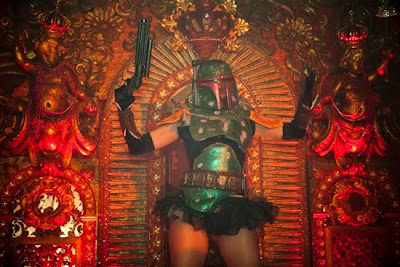 How many times must popular culture fold in upon itself before it produces a Star Wars burlesque show? Liz Ohanesian of LA Weekly profiles this new show from the Los Angeles club, Bordello. Click through to see a number of photographs which may both titillate you and destroy your inner child once and for all (assuming, of course, that your inner child survived the prequels perpetrated by George Lucas, which is a mighty assumption indeed).

(Link Courtesy of Life is a Thrill.). 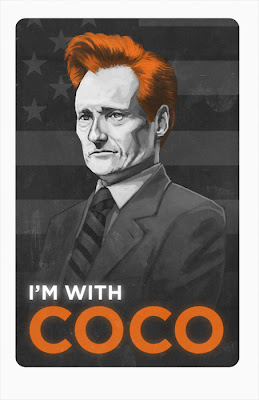 What do Colt McCoy and Conan O'Brien have in common? They both spent their lives working hard and training each day to reach what they thought to be their ultimate ambition, only to have it taken from them, just as they arrived at the scene to realize its fruition. Colt, the University of Texas starting quarterback, was injured in the opening moments of the BCS National Championship game last week, while Conan O'Brien has spent the last seven months in his dream job - host of "The Tonight Show" - only to have it taken from by network suits facing poor ratings as a result of corporate mismanagement.

I've never disdained Jay Leno as the hipper-than-thou crowd has for years; he's always seemed to be a relatively decent fellow. Although I'm not a denizen of late night television, I do recall in days of yore watching Leno guest host for Johnny Carson on "The Tonight Show." Back then, I knew Leno as the guy from the Dorito's commercials - "Crunch all you want, we'll make more." Leno somehow managed to escape the late night wars of the early 1990s with his reputation relatively unscathed; his agent, Helen Kushnick, took most of the blame for the dirty tricks required to guarantee the ascent of his career. Or so the story goes. But the way that Leno has acquiesced and allowed NBC executives to steal from Conan the job he moved across the country to take suggests a complicity that robs him of the benefit of the doubt. Perhaps Leno thinks that he is only doing what he can do earn back the job he once loved. But it seems to me that the players in this late night drama - save for Conan - have behaved so poorly that there is no redemption. Leno has always seemed to value his nice guy image; but now, it is gone. Alas.

Although it appears Conan's fate is now sealed, we here offer him our support. 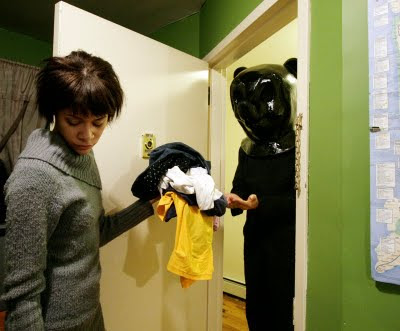 Finally, is there any greater thing in the world than Death Bear? If you've not learned of this performance art effort from Brooklyn, then drop everything and visit its website. The purpose:

We all have someone or something we would rather just forget. Things fall apart. Love hurts. Dreams die. But when you summon Death Bear to your door, you can rest assured that help has come. At first you may be intimidated by his stature and color (7 feet tall with a hard, black bear head, black jumpsuit, and black boots), but absorbing the memories of others is a dark art, and Death Bear must present himself appropriately for this solemn duty. Death Bear will take things from you that trigger painful memories and stow them away in his cave where they will remain forever allowing you to move on with your life. Give him an ex's clothes, old photos, mementos, letters, etc. Death Bear is here to assist you in your time of tragedy, heartbreak, and loss. Let Death Bear help you, and absorb your pain into his cave.

I wish I had thought of that. Sigh.
Posted by Ransom at Friday, January 15, 2010
Labels: The Week That Was

It is so good to see you back! Every time I watch Zero Effect, I think about you!

Thanks! I'm glad to see the Zero Effect project, now two years old if you can believe it, is still remembered.