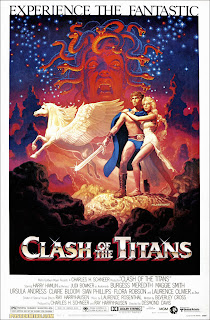 Not even I am nostalgic enough to look back at the 1981 film, Clash of the Titans, and believe it to be a good, or even a mediocre, film. It's the perfect example of a childhood pleasure that you should never revisit with adult eyes, for if you do that, the memory of it will be forever ruined. But surely it is better by 1981 standards than its remake, released this past Friday, is by 2010 standards. Initially, it seems that a remake of the 1981 version might be a good idea, as film-making techniques and technology have significantly advanced in the last 29 years. Further, Clash of the Titans is not so ingrained in the culture and popular imagination that a remake that trifles with its narrative or place in pop culture history would be objectionable. But to make a film which from the trailers appears to be even worse than the original seems a tactical error. Surely this was pitched as Gladiator with monsters? Well, I'm sure it will be on DVD in a few weeks . . . . Perhaps I will rent it at that time and do violence to whatever childhood memory I maintain of the original film. Alas.
Posted by Ransom at Monday, April 05, 2010
Labels: 1981, Films of the 1980s

What is often not mentioned is that "Clash of the Titans" was always intended to be a Ray Harryhausen love-fest. Harryhausen was the mastermind behind such Special FX features as "The 7th Voyage of Sinbad" and many, many others. At some point the casting of such greats as Burgess Meredith and Laurence Olivier pushed Harryhausen and his stop-motion monsters to the background.

By 1981 standards, these special FX were top-of-the-line for creature animation. In comparison to long shots of Tauntauns and Rancors, it doesn't read all that differently. It would be 1993's "Jurassic Park" that would abandon "Go Motion" for this new digital concept. And that would happen mid-Pre-Production.

Given that the new movie is a mostly a tribute to Hollywood's inability to generate new ideas for big budget films, I don't plan to watch the new film until cable.

However, once I got my Netflix account, I started off by watching a bunch of Hailey Mills Disney movies I hadn't seen since I was little. Million Dollar Duck, That Darn Cat, etc. I very quickly stopped getting them so as to stop the ruination of good childhood memories.

I’m such a geek that when I saw the original Clash of the Titans, I was taking potshots at it for getting the original Perseus/Andromeda myth wrong. “Who the heck is Thetis? What happened to Cetus the Whale? When did he turn into a kraken? And what the heck IS a kraken anyway?” I wound up enjoying it anyway, R2D2-wannabe mechanical owl and all.