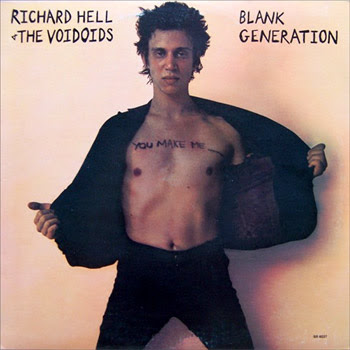 Speaking of Richard Hell, it was nice to see his most famous song, "Blank Generation," play over the end credits of "Crisp," the second episode of the HBO original series, "How to Make It in America." Although that episode originally aired on February 21, 2010, I only watched it yesterday, as I've had a backlog of that series since I began DVR-ing it earlier this year. The song is marginally relevant to the episode in that the series' two protagonists, Ben Epstein (Bryan Greenberg) and Cam Calderon (Victor Rasuk), are attempting to design a brand of jeans dedicated to New York in the 1970s, a rough and tumble time that saw the birth of punk and hip hop. Hell, as a punk icon from that era, directly influenced the late Malcolm McLaren and the U.K. punk scene. "Blank Generation," the song, appeared on Hell's LP of the same name in 1977.
Posted by Ransom at Sunday, April 11, 2010
Labels: Punk, Television