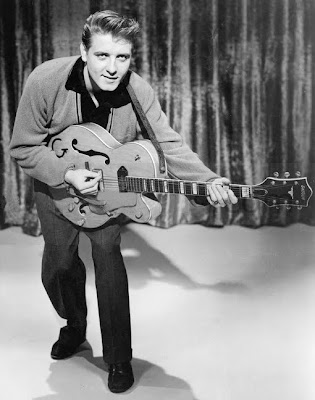 Fifty years ago today, on April 17, 1960, Eddie Cochran, a true rock and roll pioneer, died as a result of an automobile accident the previous day. Much can and has been said about his influence on the then nascent rock and roll genre. As of this writing, his Wikipedia entry notes:

It was because Paul McCartney knew the chord and words to "Twenty Flight Rock" that he became a member of The Beatles. John Lennon was so impressed that he invited Paul to play with his band, The Quarrymen. Jimi Hendrix performed "Summertime Blues" early in his career, and Pete Townshend of The Who was heavily influenced by Cochran's guitar style ("Summertime Blues" was a Who live staple at one time and is featured on their Live At Leeds album). Glam rock artist Marc Bolan had his main Les Paul model refinished in a transparent orange to resemble the Gretsch 6120 guitar played by Cochran, who was his music hero. He was also a heavy influence on the nascent rockabilly guitar legend Brian Setzer from Stray Cats, who plays a 6120 just like Cochran, whom he portrayed in the film La Bamba. Cochran is easily one of the first musicians, alongside Chuck Berry, that the late Rory Gallagher was always quick to mention as a strong influence on his musical taste and performance.

Today, in 2010, it's Saturday, so to celebrate the life and music of Cochran, go find yourself a copy of his "C'Mon Everybody," "Summertime Blues," or "Twenty Flight Rock," and blast them from your car stereo or iPod. Without Cochran, who knows what rock and roll would be now, if anything? Resquiat in Pacem.
Posted by Ransom at Saturday, April 17, 2010
Labels: RIP