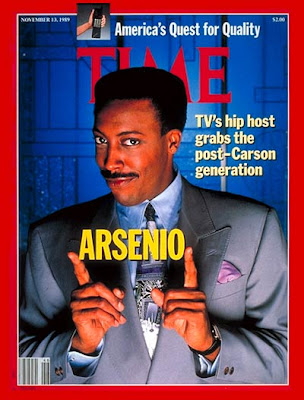 Above: The November 13, 1989 issue of Time.
Conan O'Brien continues to be in the news for his comedy tour (which began this week in Eugene, Oregon), his innovative use of the Twitter to keep in touch with his fans, and now, his new deal with TBS to return to the television airwaves later this year. It's nice to see him land at a network, even a basic cable network. However, in going from more traditional network television to basic cable, his future remains uncertain, and here's hoping that twenty years from now, we do not look back at the Conan of 2010 like we do the Arsenio Hall of 1994. Arsenio, of course, was hip, perhaps overly so, and heralded as a youthful alternative to Johnny Carson. (His dilemma: How to remain cool in the eyes of his celebrity guests without appearing obsequious, which he too often did.). Now, of course, Arsenio is a cultural relic, someone who was very visible in film and television in the late 1980s and early 1990s but who has simply vanished from the pop culture landscape today. (Sure, he's done some forgettable things since his talk show ended in 1994, but they were forgettable.). Do the millenials even know who Arsenio is or that he once hosted a talk show so many years ago? Conan, of course, has the benefit of his many years at NBC hosting his old show, but unless he can turn his new platform at TBS into something more meaningful than viewers consider when they currently think of TBS, his moment may pass, and he may sink into the type of irrelevance known only by Hall (and maybe the late Morton Downey, Jr.). Of course, maybe, as some have speculated, Conan himself can transform the perception of the network, not unlike what "Mad Men" did for AMC. He apparently will have an unprecedented level of creative freedom, but sometimes, it's the barrier of network interference that makes the artist more subversive and creative. Whatever the case, good luck, Conan.
Posted by Ransom at Wednesday, April 14, 2010
Labels: Television