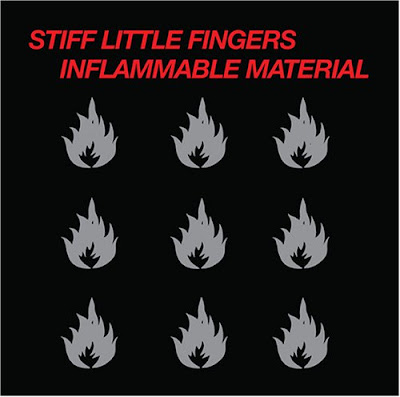 As a part of today's installment of this site's coverage of the tenth anniversary of the release of the 2000 film High Fidelity, we pause to reflect upon that movie's homage to the 1979 debut album of the Northern Ireland punk band, Stiff Little Fingers. And in so doing, we feature an original interview with Damian Rogers, an actress featured in that scene. In the film, record store clerk Dick (Todd Louiso) uses his knowledge of Green Day's influences to flirt with a customer, Anaugh (Sara Gilbert). Dick informs her that in addition to The Clash, one of Green Day's biggest influences is Stiff Little Fingers, whose album, Inflammable Material, he produces and begins to play over the store's system. As he does so, one customer (Rogers) asks if he's playing the new Green Day album. This amuses Dick and Anaugh.

Stiff Little Fingers is a band I probably never would have discovered had I not gone through a punk phase in the last decade. Sure, I remembered the scene from the film, but it was not until several years later that I stumbled across and purchased Inflammable Material. I can recall lounging about in a chair as the record playing and then sitting straight up as "Suspect Device," the album's first track, came over the speakers and shook me from the adjacent room. (Another stellar song on that album is "Alternative Ulster."). The band certainly has an energy that few groups - even those labeled punk today - apparently lack. When "Suspect Device" crashes into its chorus, there is no better example of punk rock. If you've not heard their debut album, or any of the live recordings from the 1970s, investigate them. As the years passed, the band altered its musical approach a bit, and by 1982, the band had a slightly poppier feel, as can be evidenced by its album, Now Then . . . The band has broken up, reformed, and to this day, still tours.

Here's the dialog from the scene in question:

Well, the interesting thing about Green Day is that, um, so much of their music is, in truth, directly influenced by, in my opinion, uh, two bands.

Uh, correct, The Clash. Uh, but also by this band called the Stiff Little Fingers. Um, I think you would really love this band. 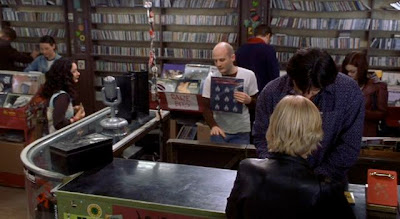 At this point in the film, Dick begins to play "Suspect Device" over the record store's speakers. It's actually difficult to hear and distinguish in the scene. (A neat aside: This scene has been referenced by the band on its Twitter account.). The scene continues:
ANAUGH

It sounds great. My name's Anaugh. 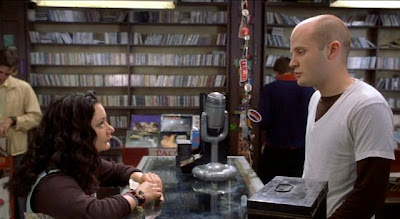 Is this the new Green Day?

In response, Anna and Dick share a knowing glance (despite the fact that Anaugh didn't know of the existence of Stiff Little Fingers until just a few moments before). 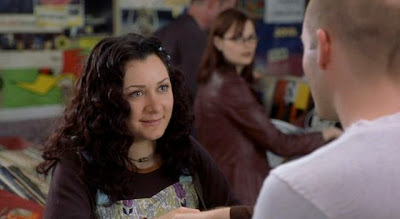 "Green Day Girl" was played by Damian Rogers, originally from Detroit, but in 1999, a Chicago resident. She can be seen in the image above in between Anaugh and Dick, at the very moment in the film where she asks her question about Green Day. (She can also be seen in this image, which was used in my previous post about the Beta Band, as well as in the background of a few other images in this post.). Last week, Rogers was kind enough to submit to an email interview with this site, in which she discussed her involvement with the film and professed a wistful nostalgia for the Chicago she knew in the late 1990s. (We here at this site fully support any type of nostalgia for the 1990s and appreciated her thoughts and memories of the era.).

Without further ado, the interview with Ms. Rogers is as follows:

1. How did you become a part of the film, High Fidelity?

A lot of the extras in High Fidelity — and in that scene especially — were people who actually spent a lot of their time and money at independent record stores in Chicago, like Reckless Records. I had become friends with a couple people who were working on the film and lots of people I knew were participating in one way or another.

It was a total fluke I ended up with a line. That line was supposed to be delivered by Al Johnson from the band U.S. Maple, but then he was cast in a larger cameo in a different scene. ([Jack Black's] character tortures him by refusing to sell him some rare vinyl — I’m pretty sure it’s a Captain Beefheart record.). So the line was up for grabs on set and they gave it to me minutes before shooting that part of the scene.

2. You are credited as "Green Day Girl." What do you remember about the filming of your particular scene?

Most of the people playing customers sifting through records in the background were a part of the Chicago music scene at the time, or at least, a particular corner of it. Ian Williams (formerly of Don Caballero and Storm & Stress, currently of Battles) has some prominent face time. A bunch of my old friends and acquaintances are in it, so when I watch it, I am totally distracted by my instinct to scan the screen for their split-second appearances.

As for the day of filming, I remember milling around, lots of waiting, sitting with my friend Nicole as she grew increasingly bored and irritable. I remember that one of the professional extras made a point of asking me why so many of us already knew each other.

It was an interesting way to spend a day of my life. A long, repetitive day, mostly spent watching other people work, but interesting nonetheless. And due to union contracts, I was issued an empty trailer when I was upgraded from non-speaking shopper to “Green Day Girl.” This delighted me, even though I didn’t have the opportunity to lock myself in there. 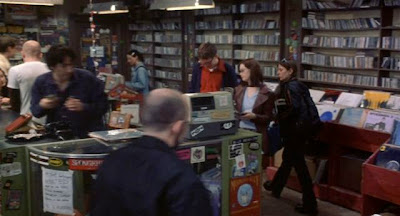 3. Were you previously familiar with the band, Stiff Little Fingers, whose song plays and is referenced in that scene?

I’d heard their name, but I don’t think I’d ever listened to them at that point. (Though my husband owns a couple of their records, so they’re in the house now.) As far as the movie’s soundtrack goes, I’m more into the old psychedelic stuff and the Drag City artists — Love, 13th Floor Elevators, Kinks, Smog, Plush, Royal Trux, etc.

4. Did you talk music with any members of the principal cast? If so, what did you discuss?

I have no memory of talking about music with any of the members of the principal cast. I did have a number of conversations about music with people working on the production side. The screenwriter and music supervisor was already deeply engaged in Chicago’s underground and independent music scene — his name still pops up in the liner notes of various Drag City releases. I can’t really watch the movie objectively, but I would credit any sense of authenticity to a real effort on the part of the filmmakers to involve people they respected in as many aspects of the film as possible.

The last time I saw High Fidelity — I’ve actually only seen it twice in its entirety — it made me a bit nostalgic for a time and a place that is ten years (and a couple cities now) behind me. The scene in which Lisa Bonet is singing as “Marie De Salle” was shot at the rock club Lounge Ax, a place I spent many, many nights. In 1999, it seemed to be the center of my social and emotional world in a way I doubt another public establishment ever could be again. Maybe it was only really for a few years, but I felt like I lived there, with all that that implies.

Lounge Ax closed at the beginning of 2000, the year the film was released, also the year I left Chicago for New York. It’s a place that survives in images and memory, but that I can’t go back and visit. It’s bittersweet to see it onscreen. For me the whole movie is a surreal blend of artifice and document. I appreciate it as a kind of collision worlds. I remember a friend of mine’s boyfriend was bored by how breathless and star-struck all these supposedly jaded hipsters became when Hollywood came to town for a few months. “It’s not the fucking Taj Mahal,” he said. “It’s a movie. In a couple years, the video will be on sale in the used bin at Reckless.” (I did, in fact, buy the DVD from a used bookstore around the corner from me in Toronto.)

But it seemed very important and exciting at the time. I suppose, like everything, it’s relative. I remember when I was spending every night at Lounge Ax filming bands during the last two weeks they were open, one of my colleagues at the literary journal where I worked marveled at my commitment, confused by my grief. After all, he pointed out, “It’s only a bar.”

Rogers is not the only one online with a nostalgia for the Lounge Ax. A Facebook group called "I Miss The Lounge Ax" boasts 903 members as of this writing. (Additional information about the now defunct club can be found here and here.). Here's the scene featuring Bonet performing at the Lounge Ax referenced by Rogers in her interview:


Rogers's official site can be found here (and, if you're on Twitter, you can follow her here). She describes herself as "an American-born poet who now lives in Canada" who "sometimes writes about music." Her first book of poems, Paper Radio, was published in the fall of 2009. (You can hear her read some of her poems at her MySpace page.). Its cover is below: 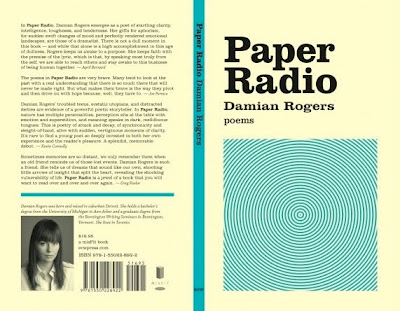 Finally, the scene in question featuring Louiso, Gilbert, Rogers, and the music of Stiff Little Fingers can be viewed here:

Whoa... I can't believe there was a point where Al Johnson would've said the words "Green" and "Day" together, as if it was a good thing, in a multi-million dollar John Cusack movie.

Oh, man, I could just imagine "Is this the new Green Day?" being said whenever a U.S. Maple record was played in-front of more than one person for all of eternity. It would have been beautiful. The "freebird" of the art music crowd.

As it stands, I can't really stomach the movie myself. Al's scene is hilarious, but probably for personal reasons.

I also remember thinking that they could have put in a little more effort when it came to that fake-band Cusack ends up releasing a record of... cause for a character with supposed good taste, they were awful in every which way.

On a side-note, Frear's directed a masterpiece in the 80's called "The Hit" with Tim Roth and John Hurt. No Fishbone t-shirts, Jack Black, or pseudo-rocknroll debates there, just great film-making... despite it's soundtrack by Clapton (bummer!).