Congratulations to Ryan and Jamie S. 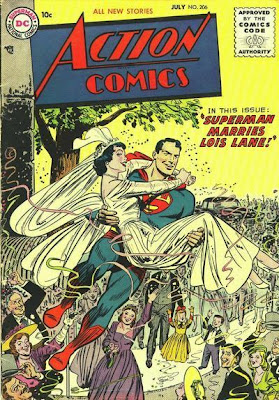 Here at Chronological Snobbery, we traditionally deal in maudlin nostalgia, not joy. However, something is different about this day. Today, Ryan S., the author of the now defunct pop culture blog The League of Melbotis (and the creator of the brand new blog, The Signal Watch) and his wife, Jamie (a blogger in her own right) celebrate ten years of marriage. Ten years! That's quite a feat: a decade of matrimony. How can Chronological Snobbery commemorate this festive occasion? By doing what we do best. Since this is a blog dedicated to forgotten popular culture, let's see what was happening on that fateful day in the realm of entertainment. 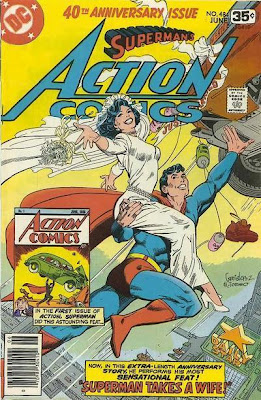 But more: Death Cab for Cutie played a brief show at Good Records in Dallas, Texas that day.

April 28, 2000 was a Friday, which means new films were released to theatres that day. That particular day saw the release of the following films: Frequency, Where The Heart Is, and The Flintstones in Viva Rock Vegas, none of which are very memorable ten years later. Also on that night, "Cosby," the second sitcom featuring Bill Cosby and Phylicia Rashad, ended its four year run. On that date, Kurt Russell, star of the 1994 flick Stargate, visited the set of the Sci-Fi television series "Stargate SG-1," but only because he was already in town filming another movie.

As you may have guessed from the comic book covers interspersed throughout this post, Ryan S. is quite the fan of Superman. On the Internet, there is no better source of Supes-related news than the Superman Homepage, which had this to say on April 28, 2000:

An inside source has reported to me that progress on the Superman: The Movie DVD is going very well. The final edit will include some of the best material from the ABC-TV extended version with computer enhancements, interviews, stills archive, and more. It promises to be spectacular.

Warner Bros is going all out, releasing all four Superman titles on DVD -- with the first slated as a special edition. Superman: The Movie is reported to be a 2-disc set that will include audio commentary by director Richard Donner, a separate music-only track featuring the wonderfully beautiful score by John Williams PLUS his commentary on the film. There will be special features on the casting of Superman, screen tests, a documentary on the making of the film, theatrical trailer, TV spots, deleted scenes, audio outtakes, as well asan extensive cast and crew bio/filmography.

Warner Home Video is putting a load of money into this DVD and it will include special motion menus and scene transitions on the DVD. It will be in Widescreen and digitally mastered, both picture and sound.

Superman II will have much less. A theatrical trailer, screen tests, and deleted scenes. The other two (Superman III and IV) will be quite generic.

The films would later be released on DVD after an extended period of Internet gossip.

In this cynical, cynical world, it is nice to have a reminder every so often that there are those that have truly found meaningful and sustaining happiness. Happy Anniversary, Ryan and Jamie!

(See here for Jamie's post on this historic occasion - complete with pictures from the 1990s.). 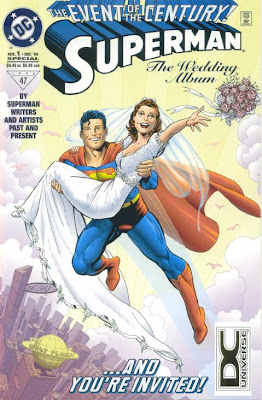 I left work early when those Superman DVDs were finally released so I could hit Best Buy for my copy.

Thanks so much for the tribute! Obviously I didn't have time to catch much in the way of programming or shows the night of April 28, 2000.

I remember the DJ played Fatboy Slim a lot during the reception, even though it wasn't on our preferred playlist.

I can't believe Craig Kilborn has been on the air for 10 years.

Craig Kilborn hasn't been on TV since 04 or 05, to my knowledge. You may be thinking of Craig Ferguson.

Indeed, Kilborn was the original host of The Daily Show before Jon Stewart back in the 1990s.