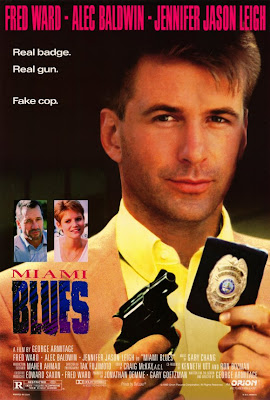 Twenty years ago today, on April 20, 1990, the film Miami Blues was released. It starred Alec Baldwin as Frederick Frenger, a con man and murderer who impersonates a police officer. Rounding out the cast were the lovely Jennifer Jason Leigh as Baldwin's pixie-esque love interest and Fred Ward as his police foil. Surely, the film received some attention at the time, as only a month and a half before its release, The Hunt for Red October, featuring Baldwin as Tom Clancy's Jack Ryan, had been released to popular and critical acclaim. But these days, little is remembered about Miami Blues, a film based on the book by Charles Willeford and written and directed by George Armitage, who would go on to direct the wonderful Grosse Pointe Blank seven years later. (Not everyone has forgotten the film, though: Two years ago, The Onion A.V. Club featured Miami Blues in its New Cult Canon series.).

But look how different Baldwin looks on the poster as opposed to how he looks now as we know him as an older, much funnier comic actor on TV's "30 Rock." My, how time flies. And look at how cute the then 28 year old Leigh was at the time with her incredibly short haircut: 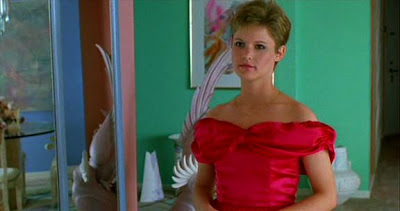 Of course, if you're doing an Internet search for any other screen captures from the film, good luck finding anything other than nude pictures of Jennifer Jason Leigh. Oh, well.
Posted by Ransom at Tuesday, April 20, 2010
Labels: 1990, Films of the 1990s

I have some caps of Alec Baldwin from Miami Blues that I did when I was feeling pervey once.

That’s a nice site you people are carrying out there.
eui digital

I am glad, things work as promised, and reaction times are excellent and according to the specifications of this high-quality organization
design agencies San Francisco