Happy Birthday, The League of Melbotis. 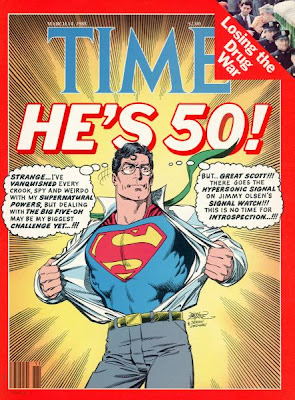 Happy Birthday to Ryan S., the once, and possibly future, author of The League of Melbotis, a now defunct pop culture blog. He's not really 50. Today, he is 35. He maintained The League blog for a total of six and a half years, starting in 2003, before retiring at the very end of 2009. Despite occasional bouts of uncertainty, he was prolific. There were thousands of posts, but here, dear readers, on his birthday, are my favorite 25 blog entries, in no particular order:

8. Untitled Post About Why Kristin Kreuk is Annoying on Smallville, (Friday, November 21, 2003)

These posts, truly, were the site's greatest hits. But the real question of the day: Did Ryan ever fulfill this birthday wish and watch The Searchers?
Posted by Ransom at Monday, April 12, 2010
Labels: Holidaze, Superman

It's amazing how much novelty foodstuffs the League has digested.

I am to blush. Thanks for the birthday surprise!