High Fidelity: The Minutemen's "Double Nickels on the Dime" 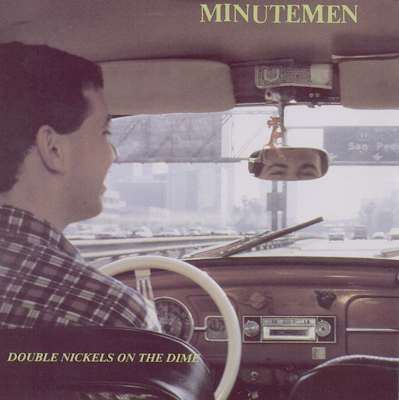 As a part of today's installment of this site's coverage of the tenth anniversary of the release of the 2000 film High Fidelity, we pause to reflect upon that movie's brief homage to an old Minutemen album. And in so doing, we feature an original interview with Chris Rehmann, one of the actors from the scene in question (featured in the image below wearing the Charlie Brown t-shirt). But, first, onto the music: Featured briefly in the film is the 1984 Minutemen album, Double Nickels on the Dime. Two hooligans, Vince (Rehmann) and Justin (Ben Carr), shoplift a handful of LPs from Championship Vinyl, located in Chicago at the corner of Milwaukee and Honore streets and owned by protagonist Rob Gordon (John Cusack). Gordon spots the two shoplifters just as they are about to leave the store; he yells to his employee, Barry (Jack Black), to bar the door, but Barry is too late, and the thieves flee the premises. Rob and Barry immediately give chase outside the store and around the corner. 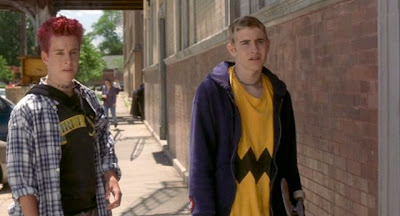 Gordon and Barry catch up to them, and Gordon orders them to halt, which they do, when the two young punks realize that Gordon has their skateboard, which may be more valuable than the pilfered records. The two miscreants them toss their records and tapes onto the sidewalk: 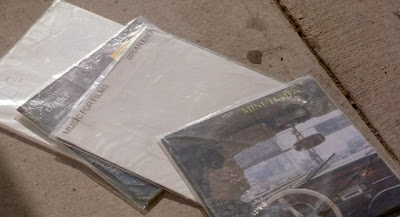 Gordon seems surprised at the records that they have stolen, going so far as to ask if they are taking them for someone else. (Note in the image above the copy of the Minutemen album at issue as well as the copy of 1978's Music for Films by Brian Eno. Gordon also professes surprise at their pilfering of music by Ryuichi Sakamoto, Serge Gainsbourg, and Sigue Sigue Sputnik.). The two young thieves scoff at Gordon's disdain, suggesting that Gordon is a musical bigot to think that just by looking at them he can discern what music they should or do in fact enjoy.

The encounter ends with the two sets of adversaries parting ways (although Gordon later learns that the two thieves are musicians in their own right, and he elects to produce their first EP). 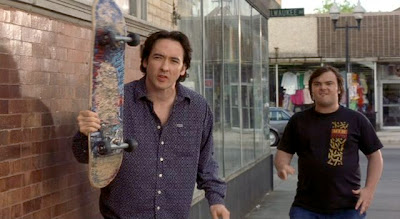 For me, the Minutemen was one of those bands that I had always heard of, but never truly discovered until later adulthood, when I could afford to experiment and buy expensive selections from the SST Records back catalog. (Try finding a new copy of one of their LPs for under $16!). Around 1991, I bought a copy of the SST Records compilation, SST Acoustic, which featured one track by the Minutemen, "Stories," which originally appeared on the band's final album, 1985's 3-Way Tie (For Last). That album, of course, was released very shortly before the untimely death of D. Boon, who along with Mike Watt, was the core of the band. It was not until a number of years after I bought the acoustic compilation that I discovered Double Nickels on the Dime, which is really an epic example of the fusion of punk and other genres from the mid-1980s.

Last week, Rehmann kindly agreed to an interview, in which he reflects upon the filming of the scene in question and his memories of shooting in Chicago ten years ago. He recalls:

I got the part when the director Stephen Frears and a casting agent Claire Simon came to a Second City class I was in. They asked me to come and audition for the part. A friend from the second City Alum named Tim O'Malley coached me through the audition and helped me get the part.

I was new to how film worked as it was my first paying job. I was just thrilled the entire shoot. I remember that my first day on the set was to do my hair. The spots. Due to the director and producers having to check out how dark or light the spots or blond was it took seven hours before I was done.

Shooting the part when we got busted was interesting because the set was in a studio and the outside was set on location. So it was run out the door. Then two weeks later we were running away from the door. Jack Black was also a lot of fun in between takes, joking around a lot.

I was not [previously] familiar with the Minutemen. I did not get a chance to talk much music with the cast. Everyone was so busy, except Jack Black, who took the time to hang out, that I did not have much time to talk music. I did overhear discussions by the producers on what music they wanted in the film and one time let John [Cusack] listen to it when he was in make up. I was not in make up with him much and he ate his lunch mostly in his trailer.

The fondest memory was getting the part meeting John Cusack and Jack Black, and then shooting in the double door for the club scene near the end of the film. I was able to watch Jack sing, and it was just a lot of fun. I also got to improvise the part where I was stealing again and when seeing the movie with friends, it got a laugh. So I was proud of that.

Since High Fidelity, Rehmann has appeared in What about Joan (a television series starring John Cusack's sister, Joan), Early Edition, and a few television commercials but, as he notes, "nothing as big or cool as being part of High Fidelity."


Anthony Ortale, a Flickr user, has posted a photograph of the exterior that was used for Championship Vinyl in Chicago and the scene at issue in this post. As Rehmann noted, the film's scenes inside the record store were on a set, but the exterior was on a street corner in Chicago. See Ortale's photograph, which shows the site now all boarded up, here.
Posted by Ransom at Wednesday, March 31, 2010
Labels: 2000, Films of the 2000s, High Fidelity, Punk