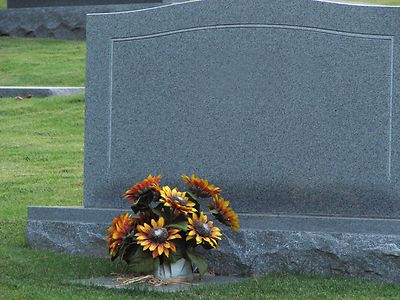 On the sidebar of this site, you'll find a blogroll entitled "Dead Blog Cemetery," which features links to blogs that were abandoned long ago by their authors. Nothing macabre there. But way back in April of 2003, in Wired News, author Chris Null wrote about an interesting, though rather depressing, topic: what happens to the weblogs of individuals who die? According to the article, "[d]eath and dying have lately become prime topics of interest for bloggers." Yikes. Null maintains a far less existential blog and founded a film criticism website back in 1995. Seven years later, though, surely this issue is much more widespread than it was in 2003, the earliest days of blogging. One wonders whether the blogging or social networking sites have developed any sort of policies on this matter now that so many millions of people are utilizing the technology. (Indeed, late last year, Facebook announced plans for its own set of memorial pages for deceased users.). The question: If I predecease this site, how would you ever know?
Posted by Ransom at Tuesday, March 09, 2010

Ugh - what a topic. We wouldn't know. That's the answer. Unless you delurked, and we knew your identity. Or you divulged it to a friend who knew you passed and they were able to do something about it.