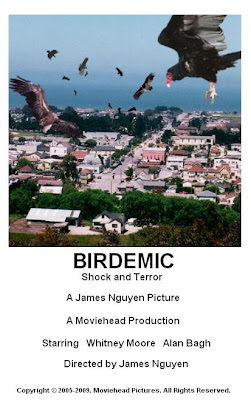 Editor's Note: Chronological Snobbery is not just about pleasantly reflecting upon history; we're also about changing history. Until our post last week, Ryan S., author of the now defunct pop culture blog, The League of Melbotis, had never heard of Birdemic: Shock and Terror, the schlocky horror film perpetrated by would be auteur James Nguyen. When he learned from us that the film would be having a premiere at the Alamo Drafthouse in Austin this past Tuesday night, he could not resist the irresistable impulse to attend. Thus, history has been changed. So, in a brief return to the blogosphere, he offers this guest post and review of the film and accompanying Q&A with Mr. Nguyen, who apparently remains baffled at the attention his film has received and the laughter prompted by it. Without further ado, his guest post is as follows:

The League Sees Birdemic: Shock and Terror
by Ryan S. (once the author of The League of Melbotis)

If I had known what the scoop was, I doubt if I would have bought the tickets. Or maybe I would have included a lot more people. About a week ago, the author here at Chronological Snobbery sent me the trailer to a new movie entitled Birdemic: Shock and Terror, which seemed to be an extremely low-budget comedy spoofing horror films, perhaps in the vein of "The Lost Skeleton of Cadavara". Like many people, I'm a bad-film enthusiast, enjoying both the intentional and less-intentional disasters of cinema. "Well, that looks awful. When does it come out?" is a phrase my wife had to learn to understand shortly after we began dating.

Ninety eight percent of what hits your local multiplex is corporate product as surely as a Lunchable is a meal. It's no secret that the movies we see are more or less designed by corporate yahoos who's idea of a fresh idea is copying the last movie to turn a profit. Like many people, I can be a little unforgiving when I go see something where one can practically see the studio's check boxes on the screen for what the producers believe is the formula for success. We're all familiar with the cynicism, contempt for the audience, et cetera, and that with the right mix of explosions, attractive lady actors, and impressive CGI (and standard issue Hollywood grade sound, lighting, music in place), a movie can be simply horrendous and folks will verify the producer's worst inclinations with a $300 million take. With a $200 million budget, you can cover up a lot.

So its not that crazy to be more forgiving when it comes to a movie written, funded and directed by a single person for which there is no 7-figure FX budget or Jennifer Connelly (but not "Clerks", which is empirically a bad movie). Part of what's easy to appreciate is that the people behind the films are not cynically trying to make a buck by running numbers. In many cases, these filmmakers are storytellers in the best sense, and unlike writing a book, a blog, whatever, they throw starry-eyed pals in the Pequod of their dream and set sail on the movie-making seas.

Such must have been the case of James Nguyen's Birdemic: Shock and Terror. Nguyen is a Bay Area software salesman by day, and a self-proclaimed Alfred Hitchcock nut and film enthusiast. He clearly did his reading about Hitch, and makes no bones about The Birds as the inspiration for Birdemic: Shock and Terror. Fortunately for you, and unfortunately for him, he may have done less reading and studying about actual movie production.

And because it is true, I now have to say the following: Birdemic: Shock and Terror is the funniest movie I've seen in a year. In the grand tradition of what makes such a movie all the funnier, in no way is this film intended to be a comedy.

While from a certain perspective, its plainly obvious that Nguyen does love and appreciate Hitchcock, the writer/director seemed to grapple with the basics of scripting, dialog, directing actors, blocking scenes, camera movement, sound recording, basic editing, basic sound design, lighting, pacing, practical FX, music selection, costuming, for what turns out to be a roughly 2-hour movie. Despite my better nature, I had tears in my eyes and was laughing through clenched teeth through much of the film. Because Nguyen was in the audience.
Here's the weird part: As incomprehensibly incompetent as the film is, it's a completely gripping 2 hours. What should have been a derivative and boring homage to a far better film becomes not at all about the romance, shock, terror or environmental overtones of the film, but about the pitfalls of film-making itself. It's the wild ride of literally not knowing what will happen next (in the production of the film, not the actual storyline, which is kind of pedestrian) that kept me from looking at my watch except to see the run time of the movie. 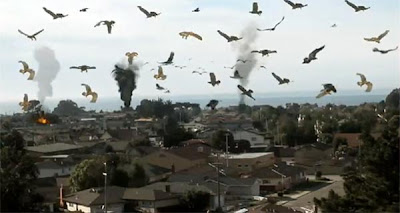 To not mention the CGI birds of the film would be a crime, and at the Alamo Drafthouse screening, Nguyen explained that he hired a student from CalArts who basically sounds like he did a half-assed job, sort of holding Nguyen hostage for more money, which Nguyen didn't have. Let us just say for the record that they aren't the best animated birds, but there is no question that they are the right birds for this movie. And as much as the newscasts in the film foreshadow events to come, so, too, do the parrots of San Francisco forecast the FX spectacular that arrives like a flock of piercingly screaming eagles and vultures.

Nguyen bills the movie as a "Romantic Thriller," creating a mash-up of a completely conflict-free young romance (which is much, much more involved than a Hollywood "meet cute" scenario) and the horror of having your hotel room attacked by furious mutant eagles. (Exploding mutant eagles, no less.) The developing romance seems hinged mostly upon our protagonist's sudden wealth as his company is bought by Oracle, and the anxiety of the love interest as to how to make a living in her possibly shaky/ possibly sky-rocketing career as a "fashion model", i.e. a wealthy software guy seems like a good catch. They spend a lot of time talking about being a successful software salesman and how great that is (again, you might recall Nguyen's day job as a software rep). Before the birds go nuts, that is.

Once the pairing of infuriated eagles and vultures appear on the scene attacking Half Moon Bay, all logic and reason is chucked out the window in what becomes a seemingly desperate chase across the countryside from the birds (who's invasion the occasionally appearing rest-of-the-world seems to not have noticed), in which no reasonable decisions are made, guns appear from nowhere, and you'd probably be a lot safer heading into town and not the beach. 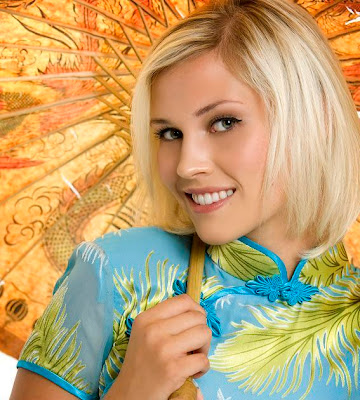 It is quite literally impossible to tell how good or bad the actors are, as editing, pacing, sound, and especially dialog do them no favors. Kudos to first time actress Whitney Moore (pictured above) for gamely appearing in her underwear. I'm just saying.

But to explain what is wrong with Birdemic: Shock and Terror is to miss what makes the movie an experience. You're just going to have to see it.

As mentioned above, we had the rare pleasure of viewing Birdemic: Shock and Terror with Nguyen at the Alamo Drafthouse, which made for a semi-horrifying evening. When I bought the tickets, I didn't quite grok the situation. But in the day or so before the show, I learned we were to see a movie that was considered so awful, it had become championed by the Adult Swim alt-comedy sketch team of Tim and Eric. Somewhere along the way, I realized that while director Nguyen would be in attendance, and had a Q&A scheduled, he was not in on the joke. Apparently, until the Los Angeles premiere, Nguyen was under the impression he had a cult horror movie on his hands.

Nguyen must have been living out what the aspiring filmmakers in the audience (and in Austin, throw a rock and you hit one) saw as a nightmare scenario. A film he'd spent years and his own wealth upon was at last being screened, and rather than gasps of awe, was being met with literal howls of laughter. For two hours. During the Q&A, Nguyen was obviously struggling with what was happening. Yes, his film was seen, and people were absolutely loving it. But in no way for the reason he'd intended. The fall from the vision one might have of themselves as a self-made Hitchcock to the realization you're the 21st Century's answer to Ed Wood has to be the strangest of all possible turns one could take in life, and an emotionally taxing one.

As a one-time film student, I cringed my way through the first ten minutes, but . . . my God. I give the Alamo audience all the credit in the world for actually asking questions as if they hadn't just guffawed their way through the movie, and as if they'd just seen an engaging thriller. I think we were all pulling for the guy, or at least hoping he wouldn't crack. But, to describe the Q&A as uncomfortable doesn't do discomfort justice. And I sort of hope the Alamo does a little soul searching before planning such a screening again.

A colleague asked me if I felt worse for Nguyen or for filmmakers who make a movie that is never seen. I still don't know the answer to that for anybody else. What I can say for myself is that I couldn't have done what Nguyen did and stand up in front of a crowd with no idea what they had found so hilarious about my very earnest, very heartfelt romantic thriller.

And then I did some reading. I don't know much about it, but it sounds like Nguyen's puzzling film-making doesn't just extend to his craft. It sounds as if he may not have always been up front with his actors and pulled a few scams. You can Google "James Nguyen allegations" on your own. There's a fine line between earnest wannabe-filmmaker and a man so blinded by his own misguided ambition and entitlement that he winds up explaining what went wrong to 200 strangers. And as I don't (and can't) know what happened with Nguyen, or if the allegations are unfounded, or whatever, I am unsure what to think. But there's a story in there somewhere, for someone. I dunno. Nothing ever ends neatly. But I don't feel quite as badly about laughing at the movie.
Posted by Ransom at Friday, March 05, 2010
Labels: Films of the 2000s

I watched the first half of the trailer politely, like watching some relative's unedited camcorder footage of a visit to Half Moon Bay. "Look, the creek!" "Look, the pumpkin patch!" and then....

it all went exploding bird....


I hope he can get it in at the Robert Redford Sundance Theatre – only the most refined thea-tah for such an endeavor.