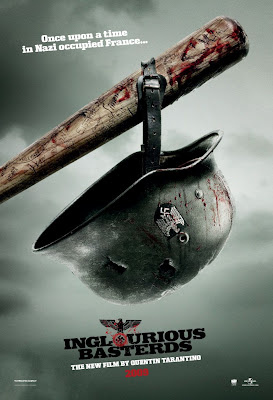 I was late to Quentin Tarantino's latest contribution to popular culture, last year's Inglourious Basterds, not catching it until it arrived on Blu-Ray not too long ago. (And yes, I have to saying "arrived on Blu-Ray" instead of "arrived on DVD" just so you know I have a Blu-Ray player.). The film had its moments, but it suffered from a schizophrenia of sorts, not knowing what type of film it truly wanted to be. That's part of Tarantino's charm, of course, but here it seemed more like a hindrance than an attempt to assimilate various genre film conventions. So, without further ado, and just in time for the Oscars, I present these 10 questions prompted by the film:

1. How did Tarantino, known for his pop culture laden, self referential dialogue, prepare to write for characters of the 1940s, when conversations were not exactly postmodern?

2. Why did Tarantino utilize two entirely distinct tones for the film? (The film begins with a chilling sequence between SS officer Hans Landa (Christoph Waltz) and a French dairy farmer; it also includes a very tense extended scene in a tavern basement. However, the scenes featuring featuring Aldo Raine (Brad Pitt) and his Bastereds are over the top and violently cartoonish.).

3. What was it like for Rod Taylor to come out of retirement to play Winston Churchill?

4. How on earth was Mike Myers cast as a British general and military strategist? (Follow Up: Was I supposed to be amused by that casting choice?)

5. If German actor Emil Jannings (played by actor Hilmar Eichhorn) finds himself at the film premiere event near the end of the film, why not Leni Riefenstahl, too? Although Riefenstahl and her work are discussed by the characters in the film, the infamous German filmmaker was not present during the film's climax. As a German film celebrity at that time, wouldn't she have most certainly been at the screening at issue?

6. Really, wouldn't there be greater security at a film premiere with so many government officials? Sure, it turns out that Landa, in charge of the event's security, ultimately betrays those assembled for the film's premiere, but wouldn't there be more than a handful of guards, even just for show?

7. Why do Bastereds Omar Ulmer (Omar Doom) and Donny Donowitz (Eli Roth) remain in the burning theatre to empty their machine guns into the crowd and deploy their explosives? Once they gun down Hitler and Goebbels, they could make a hasty retreat from the opera booth, knowing that the remainder of the German officials are trapped inside the first level of the theatre?

9. Why did Raine allow Landa to live at the end of the film? It seems out of character that the professed hater of Nazis would allow this villain to survive and live out the rest of his life on American soil (even if his superiors ordered him to allow Landa to live)?

10. Considering Tarantino's fondness for revenge stories, will we ever see a sequel of sorts, starring a young adult Maximillian, bent on avenging the death of the father who died at the below street level bar on the very day he was born?
Posted by Ransom at Thursday, March 04, 2010
Labels: Films of the 2000s, Quentin Tarantino

I have to admit that I'm a fan of Tarantino, so it's hard not to slip into an apologist's pov when considering some of the choices he makes on film. Overall looking back at his flicks, I'd have to group IB with Jackie Brown as yet another transitional film. When he first burst on the scene he was concentrating on gangster/heist movies and by the time that he got to Jackie Brown I think his focus was beginning to change. On the surface it's another heist movie, but I think this was also the first time he really set his sights on utilizing specific genre conventions that he could mold into something greater than the sum of it's parts (in JB's case Blaxsploitation and some Film Noir conventions.) It made the film a little uneven and slow as it was trying to hold onto some of the stylized aspects and kitchy dialogue of Pulp Fiction and R. Dogs, but it was a bit more mature.

Like Jackie Brown, IB is both holding onto the conventions of the couple of films that preceded it, taking a cue from genre exploration (WWII men-on-a-mission flicks and more importantly propaganda films) while also stretching out into new territory for Tarantino. If you look at all the crazy stylistic choices in Kill Bill (the Bride recognizing-an-enemy dissolves and sound effects shots, the freeze frame introductions to characters, the chapter inserts, etc.), these carry on to IB, but you can tell Tarantino is trying to move away from this ultra-stylistic sensibility by giving up a plethora of opportunities to continue trends (like giving each member of the Basterds their own freeze frame logo intro, etc.)

Now in hindsight I can look to Jackie Brown and say that it eschewed in an era of Tarantino exploitation homages and tributes, and that it was uneven as it tried to also stay true to his prior films. IB feels the same way to me, clinging a bit to his past, but I can't put my finger on what the next era of Tarantino will hold aside from a bit more restraint in style.

Here's my thoughts on some of the questions the film raised for you...

#2 I think the over the top Basterds moments in the film were an example of spinning propaganda on it's head. All of these scenes actually manage to make the Nazis seem sympathetic and the Jewish American soldiers into almost monsters. I think this was the initial focus of the film when he conceived it years ago, and it's the part of the film that falls in line with Kill Bill and Death Proof the most. I think this is where he really drops the ball in his transition to a different style of film-making, which is where the rest of the movie dwells.

#4 I really hated the entire British sub-plot of the film, from the casting of Mike Myers to the addition of the film historian spy character. This stuff took away from the Basterd's story and could have easily utilized those characters instead. I also couldn't stand the blocking and sparse set dressing in the scene with Churchill, Myers, and the spy when the mission was being explained.

#8 I think Marcel dies. It's clearer in the script.

There. Now it's a proper response with embedded video and everything.