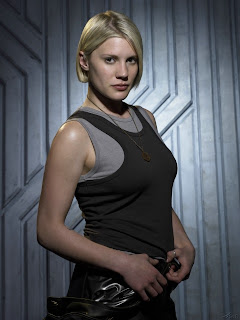 One year ago tonight, on March 20, 2009, Sci-Fi's "Battlestar Galactica" ended its run. The reimagining of the old 1970s sci-fi show began as a television miniseries in 2004 and then became a regular weekly series shortly thereafter. It received much acclaim, but it had some level of difficulty in convincing the general public that it was not a schlocky genre show. Pictured above and below, of course, is one reason to lament the loss the show. (That's Katee Sackhoff as Starbuck, which you should know.). Actually, come to think of it, the series finale of "Battlestar" was a bit controversial, as a number of viewers did not seem to appreciate the fashion in which all of the loose plot threads were ultimately tied together. You may recall the space farers ultimately find Earth - their long sought destination - but they arrive well in our planet's past. Thus, it is suggested that the series protagonists become our forebears. Some people didn't dig it, as can be noted in the comments to television critic Alan Sepinwall's review of the finale. (I foresee a similar reaction to this year's upcoming series finale of "Lost," if only because some people will never be satisfied with anything.). Although the series finale had its flaws, it wasn't too bad, actually, and I suppose there's no way to truly satisfy a die hard fan of anything. 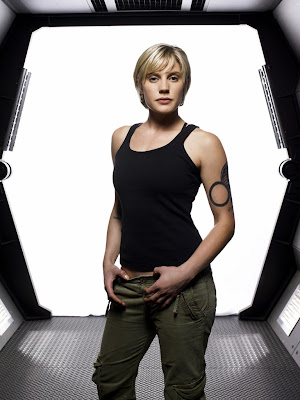 The problem I had with the conclusion is that it stepped outside the boundaries of the world that had been communicated to the audience. This forced, obviously, a deus ex machina (literally) to resolve issues that, obviously (again!) hadn't been clearly resolved in Ron Moore's mind before the arcs got underway.

1. What was Gaius' 6? A rogue AI? A higher functioning Cylon? A Cylon from a different sect, tribe, sub-race? Oh, no it's. Magic. Well, gee, thanks for that screenwriting.

2. Who built the eye of Jupiter contraption, who were they, why did they build it, how did they know that the astronomica phenomenon would come to fit the purpose of the temple

What is the nature of the fall of Kobol? Unanswered.

3. Says Valeri / Athena speaking of the primitive times on Kobol (I think in Razor): "Athena, whatever she was wasn't a goddess." Oh? What was she?

4. Prophecy as plot device is painful, like time travel. It forces the question: But then who is in charge of our universe then?

5. How exactly did the first Dean Stockwell get from Earth to the ship? He just pops up and hitches a ride. Weird.

6. Angels all around us arc. What crap.

7. The show was set up to be this amazing science fiction and at the end it comes up conjuring voodoo. That's bargaining in bad faith.