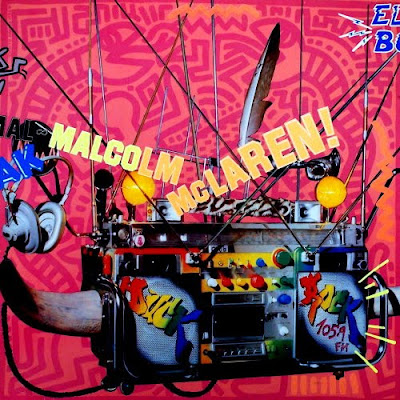 Yesterday, punk rock icon Malcolm McLaren died at age 64. This is big news (and the far better nostalgia blog Slicing Up Eyeballs has its coverage here.). Often called a punk rock impresario, he managed the New York Dolls for a bit in the early 1970s and later in that decade brought the Sex Pistols into being (which means, of course, he is to blame for introducing Sid Vicious, the ultimate poseur, to the world). In 1983, he released Duck Rock (the album cover of which is depicted above), which assisted in the rise of hip-hop in the U.K. Perhaps McLaren receives a bit too much credit today for fashioning the punk rock aesthetic, as he simply appropriated many things from Richard Hell, Tom Verlaine, and the New York Dolls. (It's no coincidence that Hell's "Blank Generation" predates the Pistols' eerily similar "Pretty Vacant."). But he was a fierce self promoter and exploiter and certainly punk rock would be a much different thing today without his efforts and influence. And in perpetrating the Pistols, McLaren apparently frightened much of the United Kingdom back in the day. And that's certainly a punk rock thing to do. Resquiat in Pacem, Malcolm, and say hello to Sid for us, wherever he may be.
Posted by Ransom at Friday, April 09, 2010
Labels: Punk, RIP

So, let me try again. 140 characters are not nearly enough.
I was really into punk rock in the late 80s, and from my naive-teenager standpoint, there was almost no difference between the anarchist blue-collar Brazilian bands I liked and the Sex Pistols and The Clash and the Ramones. And to be honest, even today, being perfectly aware of the politics and marketing and everything, I have to admit I still like the Pistols. Maybe it's just nostalgia, I don't know. And I can't help thinking of Sid Vicious as an icon of the f*ck-everything-I-really-don't-care punk-rocker lifestyle rather than the ultimate poseur, as you put it [too harsh! =)]. Don't get me wrong, being *responsible adults*, of course we wouldn't approve of all his choices, but he was still a teenager, an angry, depressed, drugged, teenager, who was being paid and idolized to be angry, depressed and drugged. And not being able to play his instrument was just an added bonus in the do-it-yourself frame of mind: hey, you don't even need to learn how to play! OK, now I'm being sarcastic, but this kind of thought is exactly why we must acknowledge the brilliance of Malcolm Mclaren, despite of all his Svengali tactics and overall douchebaggery. He knew what people wanted, and he *really* knew how to put things together [even though they were not always his to begin with] and take them to the next level.
Ok, I'm done now. Keep in mind I'm not a native English speaker - and that I'm always very partial when it comes to my teen obsessions...

My point is that Vicious was all image; McLaren put him in the band because he liked the way he looked and dressed, not because he added anything to the musical enterprise. He could not play bass; at many gigs, the band simply unplugged his instrument from the amplifier. Thus, it wasn't that he was attempting to play, he wasn't playing. He was just up on stage with musicians doing some type of punk rock Guitar Hero.