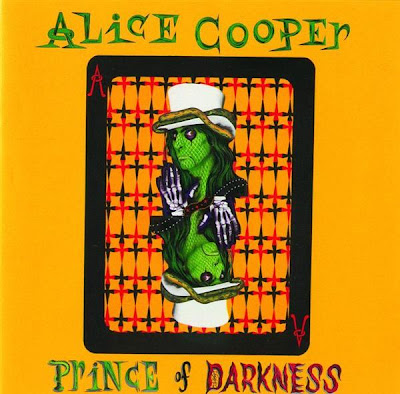 Back in high school, when I was into hard rock and heavy metal, I discovered this 1989 compilation by Alice Cooper, entitled Prince of Darkness. I'm not sure I knew too much about Alice Cooper at that time, other than his then recent fare, like "Poison," from his 1989 album, Trash. I certainly knew little, if anything, about his career from the 1970s, although I had likely such songs as "I'm Eighteen," "School's Out," and the like. But somewhere along the way, after the release of Trash, and likely after Jon Bon Jovi referenced his fondness for Cooper on radio's "Rockline," I stumbled across this 1989 comp of previously released material and bought it.

What I remember about this album is the absolute silliness of some of the songs that were supposed to shock me, like "Roses on White Lace." Let's take a look at the lyrics to the song, which is about a man chancing across a former lover on her wedding day:

Sigh. What's shocking, really, is the fact that a song implying violence against women could be released as late as 1989 and receive little, if any, protest in response.

Also included on the comp was a live version of Cooper's classic "Billion Dollar Babies" as well as "He's Back (The Man Behind The Mask)," a 1986 tune Cooper wrote for one of the Friday the 13th movies and which sounds almost new wave. "Prince of Darkness," also included on the disc, is a 1987 song which Cooper wrote for the John Carpenter film of the same name.
Posted by Ransom at Saturday, June 05, 2010
Labels: 1989, Hard Rock