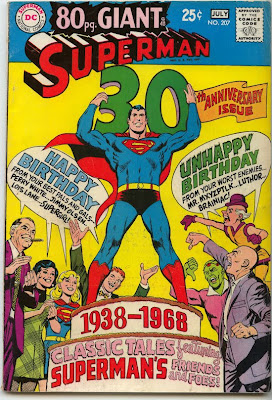 What to say on the occasion of the birthday of RHPT, long time friend and reluctant blogger? He is an enigma, especially to the blogosphere, which he revisits and vanishes from cyclically. He has many former blogs populating the Internet, which he started and abandoned over the years. With the triumphant return of Ryan S. to the blogosphere, and with this site's return from its extended hiatus, we here at Chronological Snobbery hoped that RHPT would throw himself back into the blogging game, but so far he is just sharing links via Tumblr.

Perhaps some day he will resume personality blogging.

But until that time comes, we here wish him, our old friend, a happy birthday.
Posted by Ransom at Friday, June 25, 2010
Labels: Holidaze, Superman