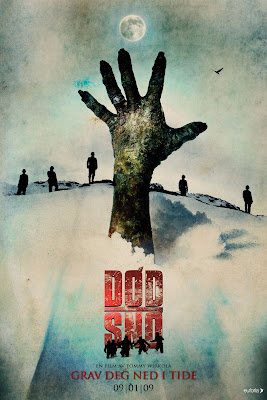 Apparently, in Norway, vacationing medical students are as puerile as American high school students, or so we are led to believe by the first half of Dead Snow, a recent Norwegian horror flick. In the film, a group of young people trek to a remote cabin in the frozen mountains. What they don't know: the region is the home of a large group of zombified Nazi soldiers from the '40s. Written by Tommy Wirkola and Stig Frode Henriksen, and directed by Wirkola, the film is adequate zombie fare but seems internally inconsistent at the same time.

The first half of the film does not inspire much confidence in its quality. The young protagonists gab away like American teenagers, generally being obnoxious and certainly not acting like presumably more mature medical students. They engage in that staple of the postmodern horror movie: referencing popular culture and films with similar situations, mostly American horror films from the 1980s (including the mostly forgotten April Fool's Day). One character does, however, have the sense to wear a t-shirt emblazoned with the logo of a long ago Peter Jackson film. Watching the first half of the movie, though, it seemed indistinguishable from late 1980s horror film rubbish. How else to characterize the scene in which Chris (the generically hot Jenny Skavlan) and the rather goofy Erlend (Jeppe Laursen) have sex in an outhouse?

But then something happens.

As the film progresses, and the film abandons the carefree exploits of the medical students and evidence begins to suggest that strange things are afoot on this mountain, the tone of the film changes. It becomes much more interesting, and characters are forced to make desperate choices and live with their consequences. Suddenly, the film becomes more than just a recycled American teen slasher movie. One medical student, Martin (Vegar Hoel), initially suffering from an inexplicable fear of blood, must quickly overcome that phobia when bitten by a zombie. Another character, Hanna (Charlotte Frogner), chooses to force a deadly avalanche on the snowy mountainside rather than let a zombie take her. However, the boldness of the characters in the second half of the film doesn't match with the juvenile actions of the same characters at the film's beginning. Aside from the sudden appearance of a monstrous horde of zombies, there is no more meaningful explanation for the dramatic transition in character and in tone. Would that the characters had started out a bit more developed and seasoned in the first half of the film, the second half would feel a bit more earned.

Mythology wise, there's not much to the film. It's never really explained how the Nazi soldiers from the 1940s actually became zombies (or why, after six decades, their uniforms remain so well preserved). There's clearly some connection to a boxful of trinkets in the cabin, though it's unclear why the zombies are attempting to retrieve it. Whether that holds some key to their zombification, or whether it may allow them to again become human, is never quite explained.

But, if you're curious, be patient, and wait until the second half of the film before giving up on it. 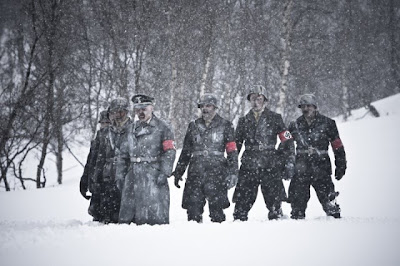