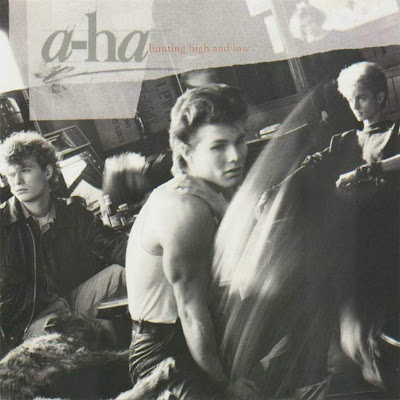 Released twenty five years ago today, on June 1, 1985, was the Norwegian band A-Ha's Hunting High and Low which, of course, featured their most famous single, "Take on Me." The video for that song is quintessential 1980s pop culture fare, and its combination of pop rock and comic book imagery still resonates two and a half decades later. The band was apparently far, far more famous in Europe than it ever was here in America. In fact, to most, A-Ha is a one hit wonder who vanished from the pop culture landscape, leaving behind only this song and video.

Well, in England they had a good 10-20 solid top 20 hits up until 1994 when they split, including the No.1- The Sun Always Shines on TV, and the Bond theme, The Living Daylights. Reforming in 2000, their last album- Foot of the Mountain was Top 5 in the UK last year, and they had a top 10 single as recently as 2006 with the great analogue. I went to see their farewell tour in New York where they did three sold out nights to rabid fans, and produced one of the best concerts i've seen in a while. Not bad for one hit has-beens.

Perhaps not, though to the super majority of American music listeners, they are associated with one hit and one hit alone. Perhaps that would make for an interesting future posts: bands that are mega-successful abroad but considered one hit wonders in the U.S.

Even though A-ha is a one-hit wonder, I think it's other singles aside from Take on Me are good. I like I've been losing you and cry wolf.