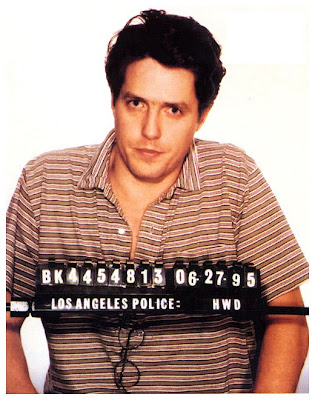 Fifteen years ago today, on June 27, 1995, the actor Hugh Grant was arrested for, well, conduct unbecoming a bashful British movie star. This act had two major consequences: a public relations firestorm for Grant and the ascension of Jay Leno as the king of late night television.

You'll recall that in 1995, Leno was still trailing David Letterman in ratings until Hugh Grant's appearance on Leno's show (which happened to come just a few days after the arrest).

If Grant had been able to control himself, would Leno have trailed Letterman indefinitely?

If he had trailed Letterman indefinitely, would he have been able to snake "The Tonight Show" back from Conan O'Brien in early 2010?

The alleged prostitute that Grant allegedly solicited was Divine Brown, depicted below, who received her fifteen minutes of fame from the incident. But she's vanished from the radar. 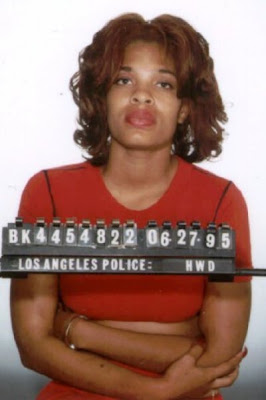 Interesting how in the long run, the incident didn't really hurt Hugh's career as a charming leading man. Eddie Murphy certainly hasn't had much going for him since his "I was just giving this transvestite hooker a ride somewhere" situation, and he didn't even have roles where female audience members were supposed to be buying him as a guy they could fall in love with. Whereas that's pretty much the main role Hugh Grant plays, and it remarkably still works for him. Even though Jude Law is still sexy as hell, even he doesn't have the level of adoration he had before his multiple escapades in infidelity came to light. Well, at least he's not a politician, or he'd probably be getting the John Edwards treatment, but as it is Law still gets some good gigs, despite his relative lack of appeal towards women. I suppose the one major consequence Grant experienced from his indiscretion is eventually losing Elizabeth Hurley. I'll probably never truly understand why people will cheat on their really beautiful, super sexy significant others with trashy people they find on the street. Sure, maybe Hurley was insufferable (personality does count for a lot) but Grant is a really attractive movie star, and yet he still couldn't be bothered with standards when deciding who he'd betray his girlfriend for. When you're a huge celebrity and you cheat, you'll most likely get caught for it; the least you could do is make it someone worth all the trouble.