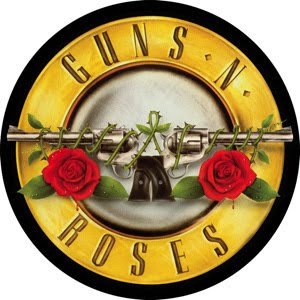 I was fortunate enough to see Guns N' Roses twice in concert, both times in 1992. History records that the band, or at least the band as we knew it, fell apart in the mid-1990s. Frontman Axl Rose, the only original member left, fumbled about for more than a decade before finally awaiting his long-awaited, ultimately disappointing, Chinese Democracy album in late 2008.

But back in 2002, Guns N' Roses mounted yet another tour and scheduled a date in Houston. I wanted to see them again, as I was curious about the band's new direction and incarnation. But, alas, I was unable to get tickets for the show, which, it turns out, quickly sold out. But it was never to be. Originally scheduled to take place on December 17, 2002, the tour was canceled, which was par for the course for Axl Rose in those days, as well as in these days.

In fact, cancellation is always a fear for the GNR concertgoer. In 1992, just a few weeks before I was to see the GNR/Metallica/Faith No More show at the Astrodome, Axl Rose stormed offstage at a show in Minneapolis (or wherever) after making a bratty spectacle of himself. (This was the concert at which Metallica lead singer James Hetfield melted part of his forearm after accidentally walking into some of the pyrotechnics. Ouch.) Riots ensued. The next few concerts were canceled, if memory serves, leading to speculation that the Houston date would be, as well.

Seems a wee bit outdated. Seems they have been touring the world and the only shows canceled were due to freak weather related disasters. By the way, remind everyone that Chinese Democracy went to #1 in 8 different countries.

You completed a few fine points there. I did a search on the subject and found nearly all persons will go along with with your blog. magazines for sale

Thank you again for all the knowledge you distribute,Good post. I was very interested in the article, it's quite inspiring I should admit. I like visiting you site since I always come across interesting articles like this one.Great Job, I greatly appreciate that.Do Keep sharing! Regards, website

You completed a few fine points there. I did a search on the subject and found nearly all persons will go along with with your blog. umrah packages