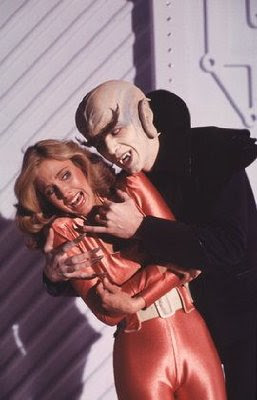 Above you'll find a fun image from the late 1970s, early 1980s television show, "Buck Rogers in the 25th Century," featuring the actress Erin Gray as Colonel Wilma Deering and Nicholas Hormann as the Vorvon. This episode, called "Space Vampire," originally aired on January 3, 1980. I remember watching this frightful episode, although I must have seen it later in reruns.

See here for a not to be missed clip from the episode in question.
Posted by Ransom at Wednesday, June 30, 2010
Labels: 1980, Television