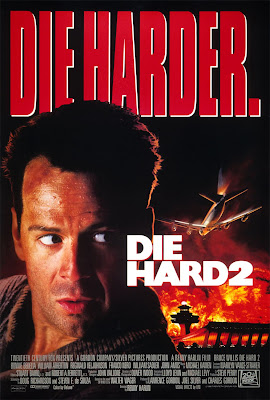 Released twenty years ago yesterday, on July 4, 1990, Die Hard II began the process of squandering the good will earned by the first film, released just two years before. Again starring Bruce Willis as John McLane, the film boasted a new director, Renny Harlin (who would also direct that summer's The Adventures of Ford Fairlane). The film attempted to hit some of the beats of the first film, and despite a brief cameo by Reginald VelJohnsen, the sequel did not have the heart and characterization that made it's predecessor more than a mere action movie.

This is not to say the film didn't at least try to be a solid action movie. Bonnie Bedelia returned as Holly, John's wife, and even William Atherton was back as the obnoxious television news reporter, Richard Thornburg. But the film was essentially a remake of the first film, this time set in an airport instead of a skyscraper office building. Like the Back to the Future sequels, it was fun, because we as viewers so enjoyed the first chapter, but in the end, the sequel felt too cheap and easy, like so many sequels inevitably do.

But back in 1990, we didn't know how awful this franchise would ultimately become. Just five years later, theatres would see the release of a second sequel, Die Hard with a Vengeance, about which we here at Chronological Snobbery blogged a bit on its fifteenth anniversary. But even then, this series of films had further to sink with its most recent sequel, Live Free or Die Hard.