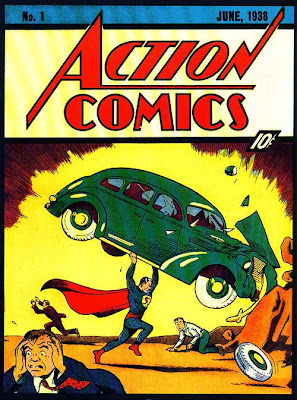 The prerequisites of daily toil keep me from offering you a substantive post today. So, content yourself with the image above, 1938's Action Comics #1, which features the first appearance of Superman. My favorite story told by comic shoppe owners - and all comic shoppe owners seem to have a variation of this tale - is the person who comes in their store in an attempt to sell a would-be copy of Action Comics #1, not realizing that it is a far, far more recent reprint, than the original issue, now worth tens of thousands. If that customer sincerely believed they had such a prize (and was not attempting to pull a fast one on the owner), they must look crestfallen.
Posted by Ransom at Thursday, July 08, 2010
Labels: DC Comics, Off Duty, Superman

I can only imagine.

The oddest trend I've seen (only as a shopper, I'm not a retailer) is seeing what appear to be mothers who are standing there with their son's forgotten pile of comics, giddy with how much money they believe they are going to suddenly have from selling their kid's comics. Invariably, its a stack of stuff from the mid-90's that the store will buy for a nickel a piece, and the moms become sad.

But I always wonder where the original owner of the comics might be, and what these moms are planning to tell their children.

JackpotCity Casino Review - Dr. McD's
JackpotCity 광주광역 출장안마 casino is a no deposit casino 제주 출장샵 that 익산 출장마사지 has been around since 2015. It has a rich selection of 익산 출장샵 slot games that you can 삼척 출장샵 play on mobile and desktop and